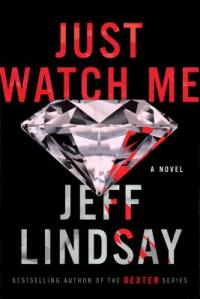 Jeffry P. Lindsay of the wildly successful Dexter fame introduces an antihero in a new series that opens with Just Watch Me. *

In this “brashly retro escapist caper“ (Kirkus Reviews), master thief Riley Wolfe has just stolen a 12-ton statue in broad daylight during its installation ceremony in Downtown Chicago, and dropped the sponsor, a big pharma CEO into the freezing waters of Lake Michigan from a combat helicopter. Next, he sets his sights on stealing the Iranian Crown Jewels, on loan to a small Manhattan private museum. Valued at billions, and protected by a state-of-the-art high tech security system, not to mention the legendary heavily-armed Revolutionary Guards, the true attraction for Riley is one simple fact:  they are absolutely unstealable. And Riley has never shied away from a challenge.

As Riley’s intricate, audacious (and often ruthless) plan unfolds, he is pursued by a brilliant and relentless Chicago FBI agent Frank Delgado, setting in motion a nail-biting game of cat and mouse.

For fans of the Ocean's Eleven ,and brings to mind Topkapi, the 1964 film based on Eric Ambler's novel The Light of Day.