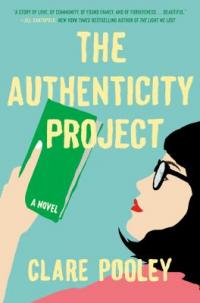 The Authenticity Project (in downloadable OverDrive eBook and audiobook) by popular British blogger Clare Pooley, is inspired by her personal story. She discovered that “telling the truth about your life really can work magic and change the lives of many other people for the better.”

79-year old Julian Jessop was once the darling of the London art world, hobnobbing (and dressed) by the likes of Vivienne Westwood.  Now alone and reclusive, he looks back at a life filled with lies and deceit, and realizes that “everyone lies about their lives”. In a green notebook entitled “The Authenticity Project” which he leaves at his neighborhood cafe, he recounts his story and challenges whoever picks up the notebook to share the truth.

From a cozy cafe, to a swanky wine bar, to the beaches off the South China Sea and back,  the notebook brings together cafe owner Monica - a former city lawyer who longs for romance and family; Hazard, a high-flying financial trader and an equal-opportunity addict; Riley, a happy-go-lucky Aussie gardener with commitment issues; and Alice, who trades in her glamorous PR job for messy motherhood, but clings to her staged Instagram persona for validation.

“This is a glossy tale where difficulties and addictions appear and are overcome, where lies are told and then forgiven, where love is sought and found, and where truths, once spoken, can set you free….Secondary characters, including an interracial gay couple appear with their own nuanced parts in the story. The message is strong, urging readers to get off their smartphones and social media and live in the real, authentic world.” (Kirkus Reviews)

For fans of The Unlikely Pilgrimage of Harold Fry (2012) by Rachel Joyce.  Readers might also enjoy How Not to Die Alone (2019) by Richard Roper.