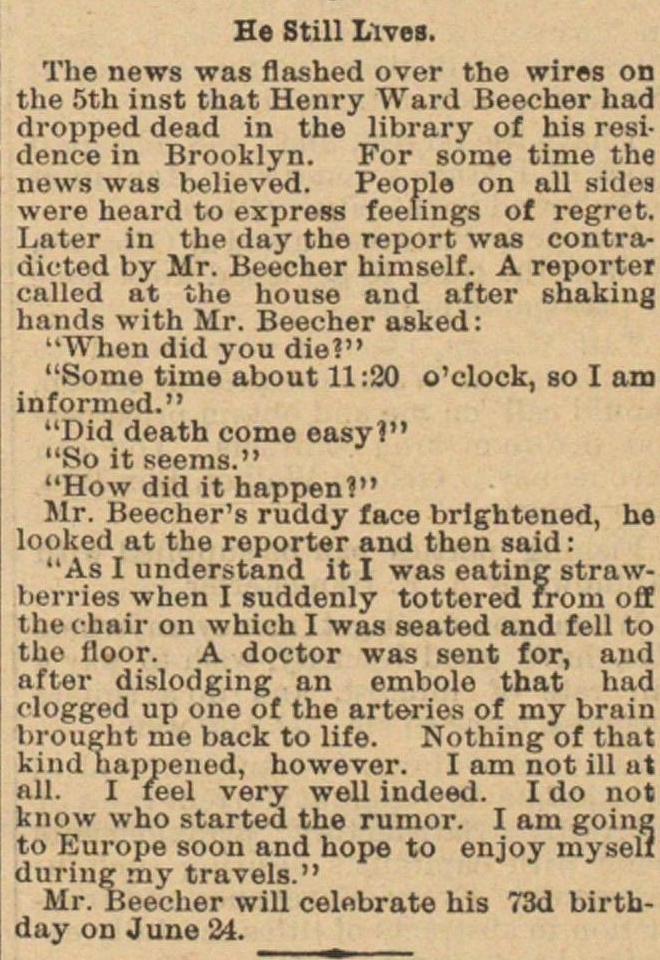 The news was flashed over the wires on tlie 5th inst that Henry Ward Beecher had dropped dead in the library of his residence in Brooklyn. For sorae time the news was believed. People on all sides were heard to express feelings of regret. Later in the day the report was contradictod by Mr. Beecher himself. A reporter callcd at the house and after snaking hands with Mr. Beecher asked: "When did you die?" "Some time about 11 :20 o'clock, so I am informed." "Did death come easyi" "So it seems." "How did it happen!" Mr. Beecher's ruddy face brightened, he looked at the reporter and then said : "As I onderstand it I was entine strawberriea when I suddenly tottored ïroni oLE the c-hair on which I was seated and feil to the floor. A doctor was sent for, and after dislodging an embole that had ologged up une of the arteries of my brain brought me back to life. Nothing of that kind happeiifjd, however. I am not ill at all. I teel very well indeed. I do not know who started the rumor. I am goine to Kurope soon and hope to enjoy myseli during my travels." Mr. Beecher will celébrate his 73d birthday on June 2i.