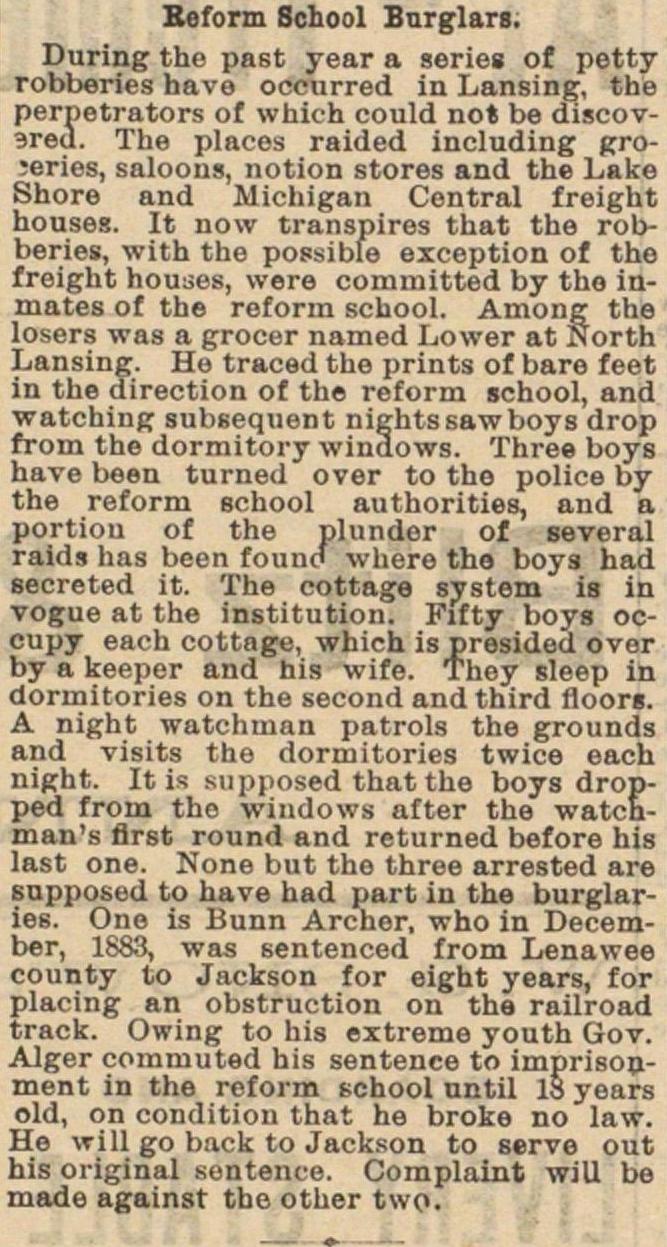 During the past year a series of petty robberies have oecurred in Lansing, the perpetrators of which could not be discov3reu. The places raided including groïeries, saloons, notion stores and the Lake Shore and Michigan Central freight houses. It now transpires that the robberies, with the possible exception of the freight houses, were committed by the inmates of the reform school. Amonjr the losers was a grocer named Lower at ïïorth Lansing. He traced the prints of bare feet in the direction of the reform school, and watching subsequent nightssawboys drop from the dormitory windows. ïhree boys have been turned over to the pólice by the reform school authorities, and a portiou of the plunder of several raids has been founo where tho boys had secreted it. The cottage system is in vogue at the institution. Fifty boys occupy each cottage, which is presided over by a keeper and nis wife. They sleep in dormitories on the second andthird floors. A night watchman patrols the grounds and visits the dormitories twice each night. It is supposed that the boys dropped froin the windows after the watcoman's first round and returned before his last one. None but the three arrested are sapposed to have had part in the burglaries. One is Bunn Archer, who in December, 1883, was sentenced from Lenawee county to Jackson for eight years, for placing an obstruction on the railroad track. Owing to his extreme youth Gov. Alger commuted his sentence to imprisonment in the reform school nntil 18 years old, on condition that he broke no law. He will go back to Jackson to serve out his original sentence. Complaint will be made against tbe other two.