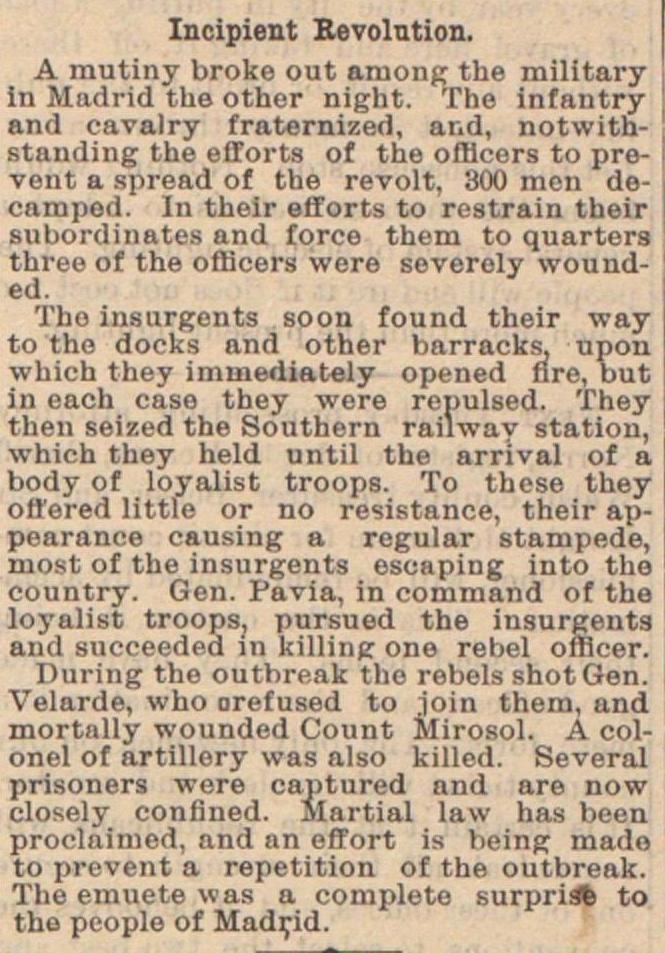 A mutiny broke out rnuonj; the military Ín Madrid the other night. The infantry and eavalry fraternizad, and, ' standing the efforts oí the offlcers to prevent a spread of the revolt. 300 men decamped. In their efforts to restrain tbeir subordinates and force them to quarters three of the offlcers were soverely wounded. Tho insurgents soon found their way to the docks and other barracks, upon whieh they iminediately opened flre, but in each case tbey were repulsed. They then seized the Southern railway station, which they held until the arrival of a body of loyalist troops. To these they offered little or no resistance, their appearance causing a regular stampede, most of the insurgents escaping into the country. Gen. Pavía, in command of the loyalist troops, pursued the insurgents aud sueceeded in killing one rebel omcer. During the outbreak tho rebels shot Gen. Velarde, who orefused to "join them, and mortally wounded Count Mirosol. A colonel of artillery was also killed. Several prisoners were captured and are now closely confined. Mnrtial law has been proclaimcd, and an effort is being mado to prevent a repetition of the outbreak. The emuete was a complete surprise to the pcople of Madrid.