Bicycle Road Mileage In The U. S. 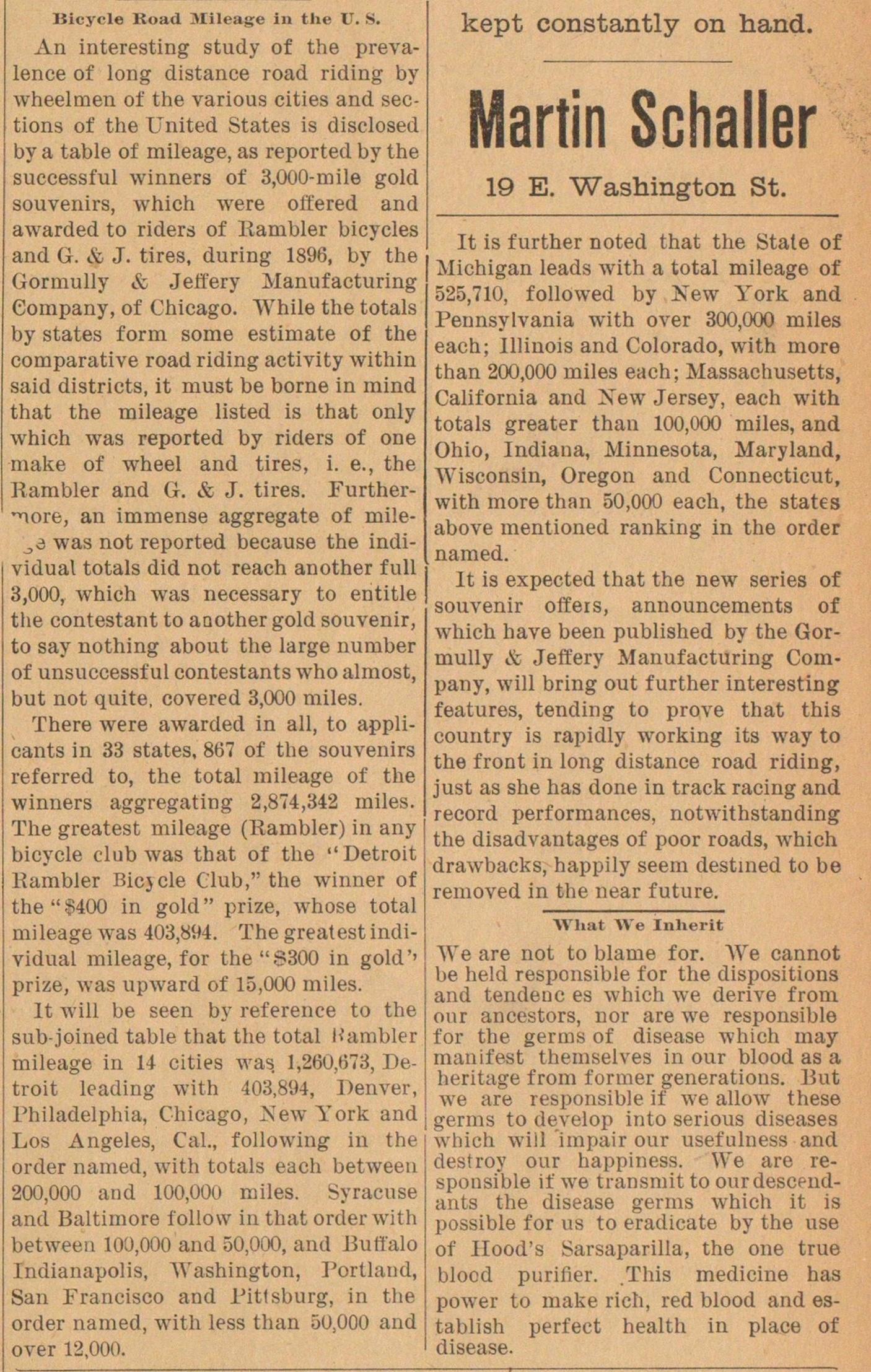 An interesting study of the prevalenee of long distance road riding by wheelmen of the various cities and sections of the United States is disclosed by a table of mileage, as reported by the successful winners of 3,000-mile gold souvenirs, which were offered and awarded to riders of liambler bicycles and G. & J. tires, during 1896, by the Gormully & Jelïery Manufacturing Gompany, of Chicago. "VVhile the totals by states form some estímate of the comparative road riding aetivity within said districts, it must be borne in mind that the mileage listed is that only which was reported by riders of one make of wheel and tires, i. e., the Rambler and G. & J. tires. Furthernore, an immense aggregate of milea was not reported because the individual totals did not reach another f uil 3,000, which was necessary to entitle the contestant to another gold souvenir, to say nothing about the large nuniber of unsuccessf ui contestants who almost, but not quite, covered 3,000 miles. There were awarded in all, to applicants in 33 states, 867 of the souvenirs referred to, the total mileage of the winners aggregating 2,874,342 miles. The greatest mileage (Rambler) in any bicycle club was that of the "Detroit Rambler Bicjele Club," the winner of the "400 in gold" prize, whose total mileage was 403,894. The greatest individual mileage, for the "S300 in gold'1 prize, was upward of 15,000 miles. It wiil be seen by reference to the sub-joined table that the total Hambier mileage in 14 cities was 1,260,673, Detroit leading with 403,894, Denver, Phüadelphia, Chicago, A'ew York and Los Angeles, Cal., following in the order named, with totals each between 200,000 and 100,000 miles. Syracuse and Baltimore follow in that order with between 100,000 and 50,000, and Batíalo Indianapolis, Washington, Portland, San Francisco and l'ittsburg, in the order named, with less than 50,000 and over 12,000. It is further noted that the State of Michigan leads with a total mileage of 525,710, followed by Kew York and Pennsylvania with over 300,000 miles each; Illinois and Colorado, with more than 200,000 miles each; Massachusetts, California and Xew Jersey, each with totals greater than 100,000 miles, and Ohio, Indiana, Minnesota, Maryland, Wisconsin, Oregon and Conneeticut, with more than 50,000 each, the states above mentioned ranking in the order named. It is expected that the new series of souvenir offers, announcements of which have been published by the Gormully & Jeffery Manufacturing Company, will bring out further interesting features, tending to prove that this country is rapidly working its way to the front in long distance road riding, just as she has done in track racing and record performances, notwithstanding the disadvantages of poor roads, which drawbacks, happily seem destined to be removed in the near future.