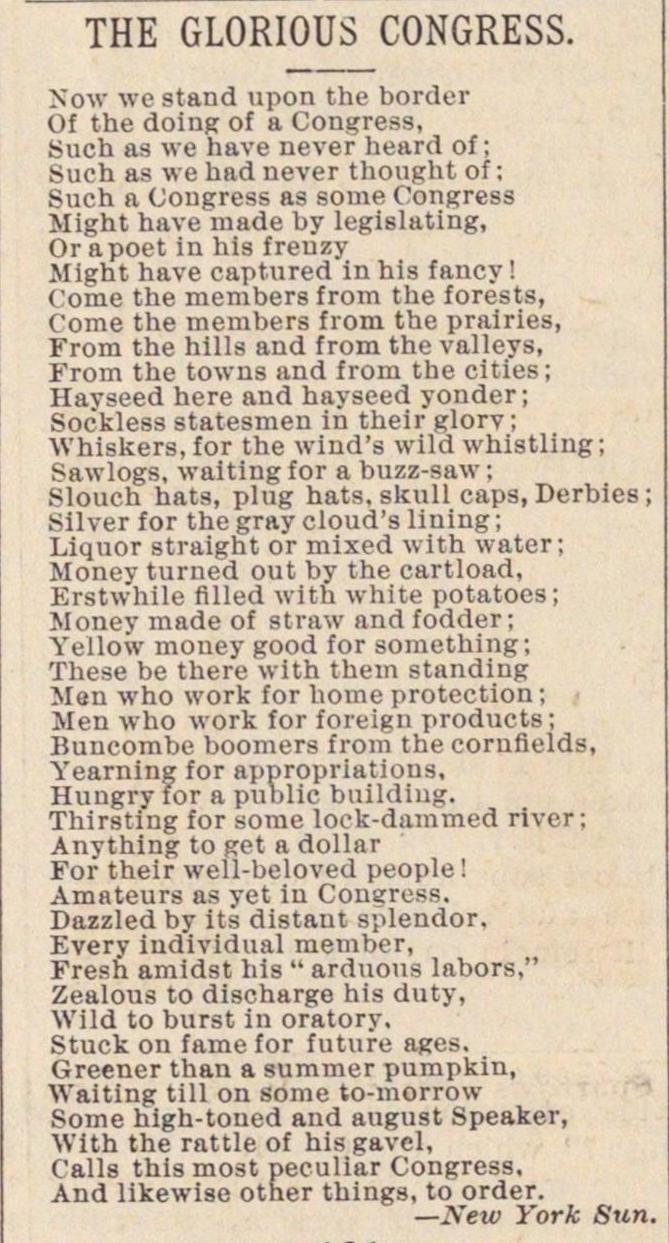 Noir wc stand upon the border Of the doing of a Congress, Such as we have never heard of ; Such as we had never thought of: Such a Congress as some Congress Might have made by legislating, Or apoet in his freuzy Might have captured in his fRncy ! ('ome the members from the forests, Come the members from the prairies, From the hills and from the valleys, From the towns and from the cities ; Hayseed here and hayseed yonder; Sockless statesmen in their glorv; Whiskers.for the wind's wild whistling; Sawlogs, waiting for a buzï-saw : Slouch hats, plug hats, skull caps, Derbies ; .Silver for the gray eloud's lining; Liquor straight or mixed with water; Money turned out by the cartload, Erstwhile filled with white potatoes; Money made of straw and fodder; Yellow mouey good for something; These be there with thein standing Men who work for home protection ; Men who work for foreign products; Buucombe boomers from the cornfields, Yearning for appropriations, Hungry tor a puolic building. Thirsting for some look-dammed river; Anything to get a dollar For their well-beloved people! Amateurs as yet in Coneress. Dazzled by its distaut splendor. Every individual member, Fresh amidst his " arduous labors," Zealous to discharge his duty, Wild to burst in oratory. Stuck on fame for future ages. Greener than a summer pumpkin, Waiting till on some to-morrow Some high-toned and august Speaker, With the rattle of his gavel, Calis this most peculiar Congress. And likewise other things, to order.