Fame For The Great U. Of M. 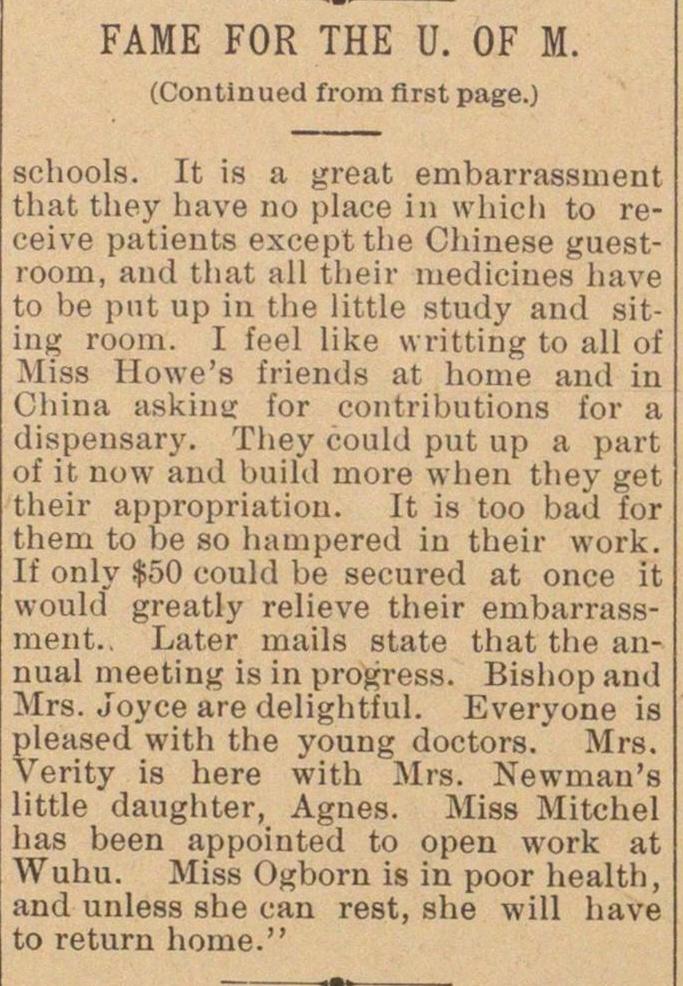 The last issue of the Northwestern Cliristian Advocate gives the following account of the reception given the two Chinese girls who graduated from the University last June, upon tiieir arrival home at Kiukiaug, China: Some years ago Miss Gertrude Howe üf Michigan, who represents the Woman's Foreign Missionary society iu in Kiukiang, China, sent two Chinese girls of that city to be educated in the medical department of tlie Michigan University. These have graduated and are again in China. They are known to us as Ida Kalm and Mary Stone, but we suspect that they have some Chinese namen of their owu in reserve. Upon their arrival at Kiukiang they had a unique reception which is described by Mrs. R. O. Irish, who is missionary in that city. The letter is kiudly sent to us by Mrs. N. P. Griffin of Fond du Lac, Wis., who is the mother of Mrs. Irish : The two Chinese young women completed a four-year's medical course in the university at Aim Arbor. Miss Gertrude Howe bent every energy to acconaplish her cherished purpose. She has had much of prejudice to conteud with. Those who have looked askance would now be glad to reap benefit froni the experiment. Already has a cali come to send one ' of the girls to West China. Miss Hovve's reply was, "The ;iris have plenty to do here, and your best way, if you have work for nu educated Chinese girl, is to edúcate one." Ida Kalm wisely says: "Many would like the service of girls who have had the training we have had, but few would niake the sacrifice to accomplish it that mother has made" [She is the adopted daughter of Migs Howe.] We can imagine Miss Howe's delight as we read the following description of a genuine Chinese ovatiou : As soon as the girls left the steamer the men who were in charge cf the firecrackers set them off. Oh, such a smudge ! We were blinded and choked. Tlvey had thousands of flrecrackers wound about long, slender bamboo poles. The men went ahead of the chairs and, of course, so much firing attracted a great deai of attention. It is usual only for great officials to get such receptions. What a crowd ! We were pushed every way and separated, and with difficulty got together again. Ida and Mary were the attractions, and the people crowded around,and when we started tliey followed our cliairs, asking questiona. We foreignersdistributed ourselves so as to oversee the girls. Mias Stanton kept at the head; Misa Ogborn, with Miss Merrill, was in the midst, aud I brought up the rear. The older achoolgirla and the women from the Bible school met the girls and the foreiguers of our mission. Once, the girls who were ivalking were annoyed by boys or men. Siome men walked by my chair asking about the girls. I was glad to spread all information possible and told thern all my limited Chinese vocabulary allo wed. Even when we turned into the school compound, a crowd followed. Wheu I reached the house, Miss Ogborn left me in possession and went to the back door for fear of trouble there. I had to face from forty to fifty men and boys who were at first determined to get into the house. The boys tried to dodge under my arms. I repeatedly thanked them for coming and wished them good night, but they did not take the hint. 1 told them it was a girls' school and no man could enter. At last I had to say "Tseo" (walk), and they reluctantly went. While going from the steainer to the house, natives asked on all sides, "Are they Chinese ? In what foreigu country have they beeu? For how many years?" We told them they had been educated and now are good doctors. "Can they heal the sick?" they asked, and a grunt of satisfaction was heard as those nearest the chairs passed back the reply to others. The interest of the natives was entirely friendly. The young doctors have already been well advertised in their native town. Another question was: "From what city do they come?" and their pleasure was evident when told that they belonged to Kiukiang. In a letter of later date Mrs. Irish says: "We had all supposed that the young doctora would have to solicit patronage and gradually work into practice. On the third day after arrival three patients came. The next day they returned for further treatment, and on the day followiug eight new ones came. All are outsiders and not connected with the mission. Besides these are some cases in the girls and women's (Contlnued on 8th Page.) FAME FOR THE U. OF M. (Continued from flrst page.) schools. It is a great embarrassment that they have no place in which to receive patients except the Chinese guestoom, and that all their medicines have to be put up in the little study and siting room. I feel like writting to all of Miss Howe's friends at home and in China asking for contributions for a dispensary. They could put up a part of it now and build more when they get their appropriation. It is too bad for them to be so hampered in their work. If only $50 could be secured at once it would greatly relieve their embarrassment.. Later mails state that the annial meeting is in progress. Bishop and "Irs. Joyce are delightful. Everyone is )leased with the young doctors. Mrs. Verity is here with Mrs. Newman's ittle daughter, Agnes. Miss Mitchel las been appointed to open work at Wuhu. Miss Ogborn is in poor health, and unless she can rest, she will have to return home."