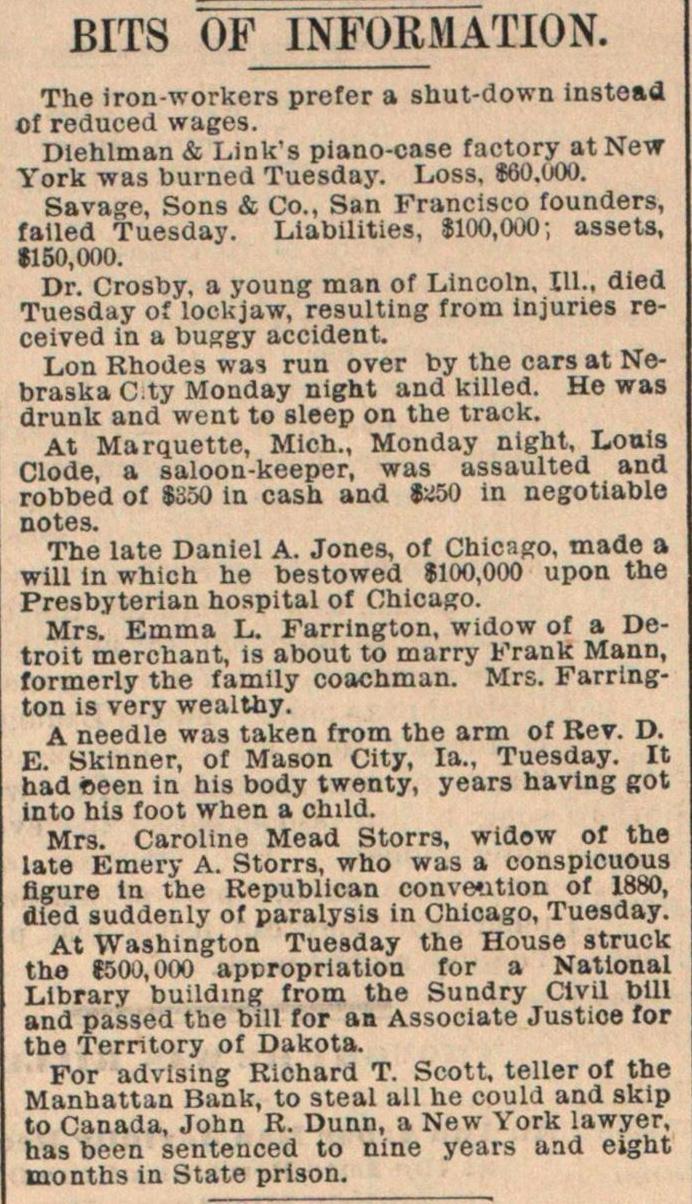 The iron-workers prefer a shut-down instead of reduced wages. Dlehlman & Link's piano-case factory at New York was burned Tuesday. Loss, $60.U00. Savage, Sons & Co., San Francisco founders, fatled Tuesday. Liabilities, $100,0ü0; assets, $150,000. Dr. Crosby. a young man of Lincoln, III.. dled Tuesday of loekjaw, resulting from Injuries received in a buggy accident. Lon Rhodes was run over by the cars at Nebraska C.ty Monday night and killed. He was drunk and went to sleep on the track. At Marquette, Mich., Monday nlght, Louis Clode, a saloon-keeper, was assaulted and robbed of $350 in cash and ïa50 in negotiable notes. The late Daniel A. Jones, of Chicago, made a will in which he bestowed $100,000 upon the Presbyterian hospital of Chicago. Mrs. Emma L. Farrlngton, widow of a Detroit merchaot, is about to marry Frank Mann, formerly the family coachman. Mrs. Farrlngton is very wealthy. A needie was taken from the arm of Rev. D. E. Skinner, of Mason City, Ia., Tuesday. It had een in his body twenty, years having got ínto his foot when a child. Mrs. Caroline Mead Storrs, widow of the late Emery A. Storrs, who was a conspicuous figure In the Republican conveutlon of 1880, dled suddenly of paralysis in Chicago, Tuesday. At Washington Tuesday the House struck the $50D, 000 apcropriation for a National Llbrary building from the Sundry Civil bilí and pa'ssed the bill for au Associate Justioe for the Territory of Dakota. For advising Richard T. Scott, teller of the Manhattan Bank, to steal all he could and skip to Canada, John R. Dunn, a New York lawyer, has been sentenced to nine years aad eight months in State prlson.