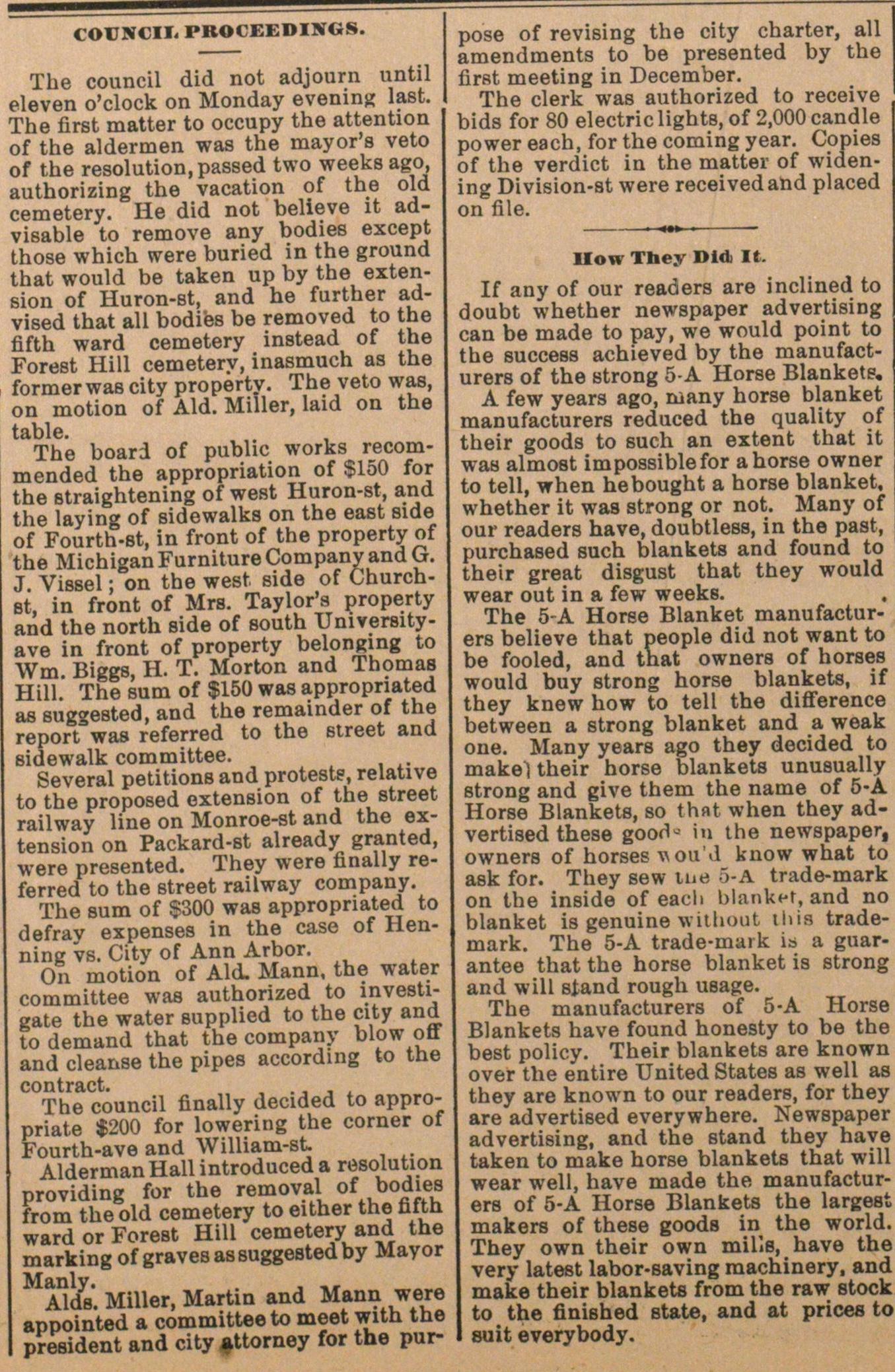 The council did not adjourn untü eleven o'clock on Monday evening last. The first matter to occupy the attention of the aldermen was the mayor's veto of the resolution.passed two weeks ago, authorizing the vacation of the old cemetery. He did not believe ït advisable to remove any bodies except those which were buried in the ground that would be taken up by the extensión of Huron-st, and he further advised that all bodi'es be removed to the fifth ward cemetery instead of the Forest Hill cemetery, inasmuch as the former was city property. The veto was, on motion of Aid. Miller, laid on the table. The board of public works recommended the appropriation of $150 for the Btraightening of west Huron-st, and the laying of sidewalks on the east side of Fourth-8t, in front of the property of the Michigan Furniture Company and G. J Vissel ; on the west side of ChurcnBt, in front of Mrs. Taylor's property and the north side of south Umversityave in front of property belonging to Wm. Biggs, H. T. Morton and Thomas Hill. The sum of $150 was appropnated as suggested, and the remainder of the report was referred to the street and sidewalk committee. Several petitions and proteste, relativo to the proposed extensión of the street railway line on Monroe-st and the extensión on Packard-st already granted, were presented. They were finally referred to the street railway company. The sum of $300 was appropnated to defray expenses in the case of Henning vs. City of Ann Arbor. On motion of Aid. Mann, the water committee was authorized to investígate the water supplied to the city and to demand that the company blow off and cleanse the pipes according to the contract. The council finally decided to appropriate $200 for lowering the corner of Fourth-ave and William-st Alderman Hall introduced a resolution providing for the moval of bodies from the old cemetery to either the fifth ward or Forest Hill cemetery and the marking of graves as suggestedby Mayor Cl Til V Aids. Miller, Martin and Mann were appointed a committee to meet with the president and city #ttorney for the pose of revising the city charter, all amendments to be presented by the first meeting in December. The clerk was authorized to receive bids for 80 electriclightB, of 2,000 candle ower each, for the coming year. Copies )f the verdict in the matter of widenng Division-st were receivedaïid placed on file.