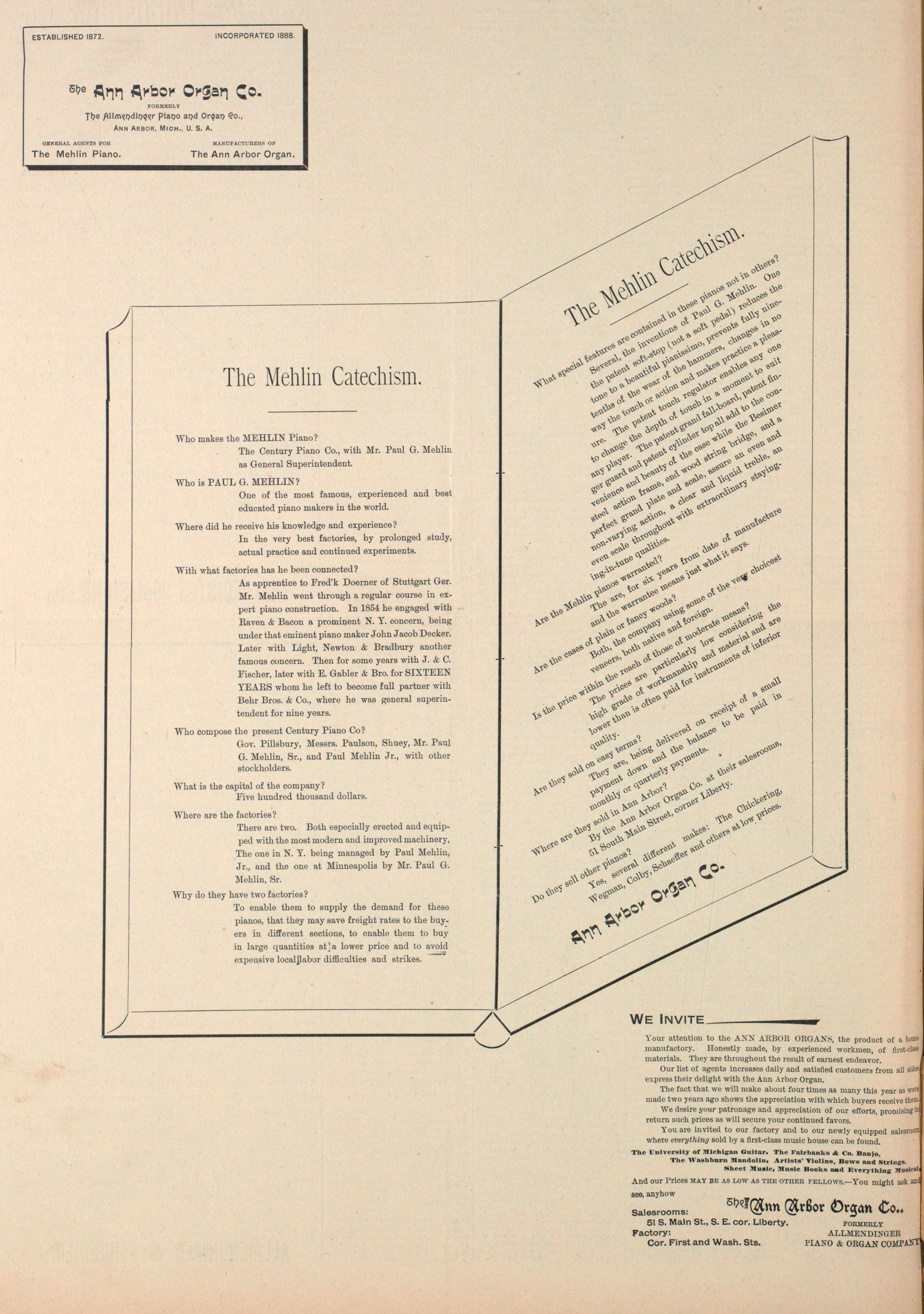 ESTABLISHED 1872. INCORPORATED 1888. Bïje FORMERLY Jf?e lllmpdirr piarjo ai)d Orai) ?o., Ann Arbor, Mich,, U. S. A. GENEBAL AOENTS FOR MANTJTACTtTBERS OF The Mehlin Piano, The Ann Arbor Organ. The Mehlin Catechism. Who makes the MEHLIN Piano? The Century Piano Co., with Mr. Paul G. Mehlin as General Superintendent. Who is PAUL G. MEHLIN? One of the most famous, experienced and best educated piano makers in the world. Where did he receive his knowledge and experience? In the very best faetones, by prolonged study, actual practico and continued experiments. With what factories has he been connected? As apprentice to Fred'k Doerner of Stuttgart Ger. Mr. Mehlin went through a regular course in expert piano construction. In 1854 he engaged with Kaven & Bacon a prominent N. Y. concern, being under that eminent piano maker John Jacob Decker. Later with Light, Newton & Bradbury another famous concern. Then for some years with J. & C. Fischer, later with E. Gabler & Bro. for SIXTEEN TEAKS whom he left to become full partner with Behr Bros. & Co., where he was general superintendent for nine years. Who compose the present Century Piano Co? Gov. Pillsbury, Messrs. Paulson, Shuey, Mr. Paul G. Mehlin, Sr., and Paul Mehlin Jr., with other stockholders. What is the capital of the company? Five hundred thousand dollars. Where are the factories? There are two. Both especially erected and equipped with the most modern and improved machinery, The one in N. T. being managed by Paul Mehlin, Jr., and the one at Minneapolis by Mr. Paul G. Mehlin, Sr. Why do they have two factories? To enable them to supply the demand for these pianos, that they may save freight rates to the buyers in different sections, to onable them to buy in large quantities at] a lower price and to avoid expensive localjlabor difficulties and strikes. S - :" oA We Invite- __- Your attention to the ANN ARBOll ORGANS, the product of a home manufactory. Honestly made, by experienced workmen, of first-class I materials. ïhey are throughout the result of earnest endeavor. j Our list of agents increases daily and satisfied customers from all sides express their delight with the Ann Arbor Organ. The fact that we will make about four tiines as many this year as were made two years ago shows the appreciation with which buyers receive tbemWe desire your patronage and appreciation of our efforts, promising ia return such prices as will secure your continued f avors. Y ou are invited to our f actory and to our newly equipped salesroom where everything sold by a first-class music house can be found. The l'nlversity of Michigan Ctnitar. The Falrbanks & Co. Banjo. The Washbnrn iliimtolm, Artista' Violins, Bowk and Strings. Sheet Musir, Music Kook-, aad Everythine Masicall And our Prices hay be as low as tiie otiier fellows.- You might ask andl aee, anyhow satóSroom8i 51?n $r6or Öt$n Co.. 51 S. Main St., S. E. cor. Liberty. foemerly Factory: ALLMEXDINGER Cor. First and Wash. Sts. PIANO & ORGAN COMPA