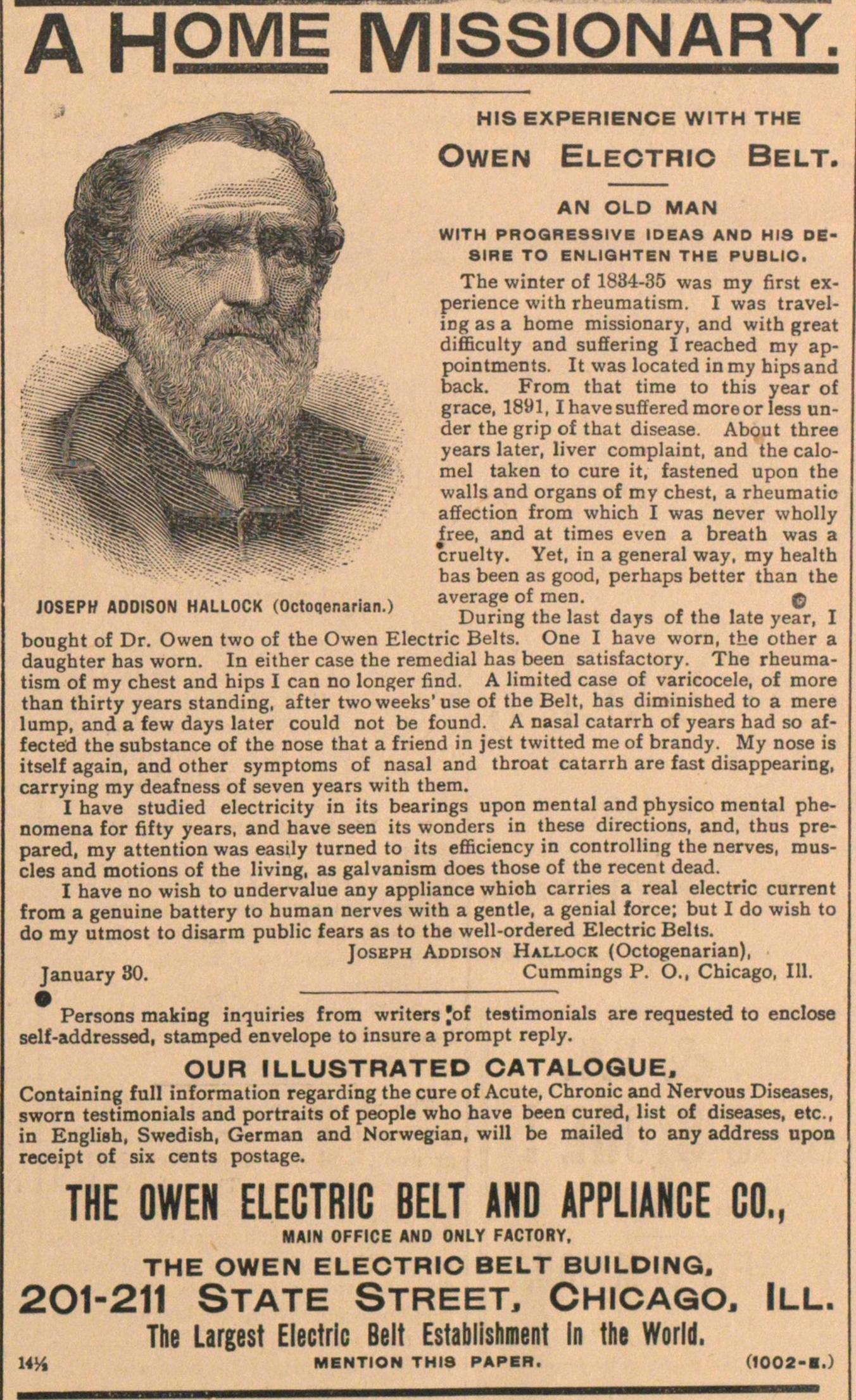 A HOME MISSIONARY. eStéSti HIS EXPERIENCE WITH THE 1 R Owen Electric Belt. I ?'v V WITH PROGRESSIVE IDEAS ANO HIS DESS, 8IRE TO ENLIGHTEN THE PUBLIC. "áSjl mei taken to cure t, fastened upon tbe affection from which I was never wholly ;iSB BHííree' anc at t'mes even a breath was a has been as good, perhaps better than the iOSEPH UDISON HALLOCK (Oet.,.n.rl...) ngeTast days of the late ye?r. I bought of Dr. Owen two of the Owen Electric Belts. One I bave worn, the other a daughter has worn. In either case the remedial has been satisfactory. The rheumatism of my chest and hips I can no longer find. A limited case of varicocele, of more than thirty years standing, af ter two weeks' use of the Belt, has diminished to a mere lump, and a few days later could not be found. A nasal catarro of years had so affected the substance of the nose that a friend in jest twitted me of brandy. My nose is itself again, and other symptoms of nasal and throat catarrh are fast disappearing, carrying my deafness of seven years with them. I have studied electricity in its bearings upon mental and physico mental phenomena for fifty years, and have seen its wonders in these directions, and, thns prepared, my attention was easily turned to its efficiency in controlling the nerves, musdes and motions of the living, as galvanism does those of the recent dead. I have no wish to undervalue any appliance whioh carries a real electric current from a genuine battery to human nerves with a gentle, a genial forcé; but I do wish to do my utmost to disarm public fears as to the well-ordered Electric Belts. Joseph Addison Hallock (Octogenarian), January 80. Cummings P. O., Chicago, 111. Persons making inquines from writers Jof testimoniáis are requested to endose self-addressed, stamped envelope to insure a prompt reply. OUR ILLUSTRATED CATALOGUE. Containing full information regarding the cure of Acute, Chronic and Nervous Diseases, sworn testimoniáis and portraits of people who have been cured, list of diseases, etc., in English, Swedish, Germán and Norwegian, will be mailed to any address upon receipt of six cents postage. MAIN OFFICE AND ONLY FACTORY, THE OWEN ELECTRIC BELT BUILDING. 201-211 State Street, Chicago III. The Largest Electric Belt Establishment In the World. MM MENTION THI3 PAPER. 11002-1.