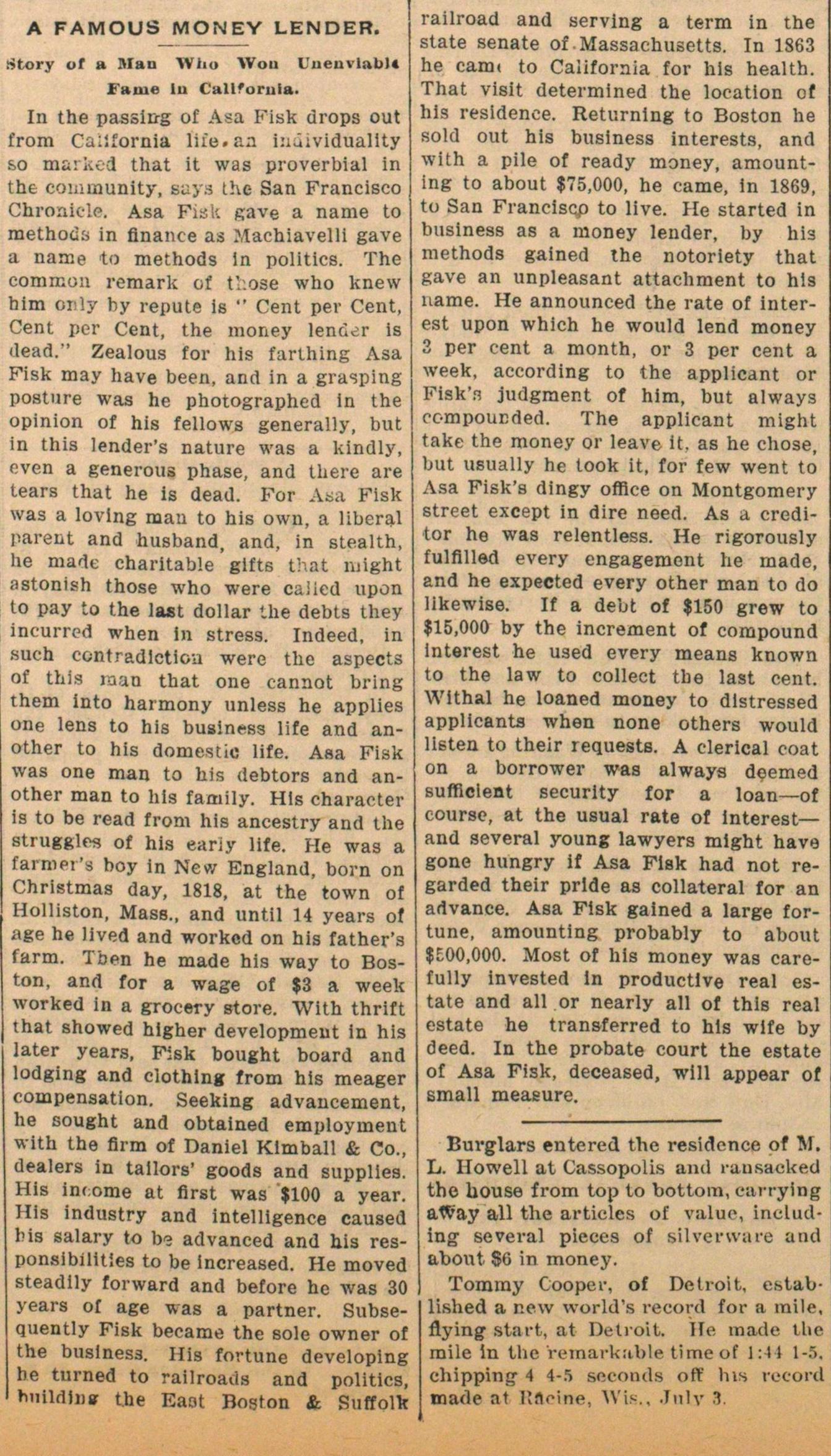 In the passiirg of Asa Fisk drops out from California life.aa iüüividuality so raarked that it was proverbial in the community, Baya the San Francisco Chroaic-lp. Asa Fisk gave a name to methods in flnance as Maehiavelli gave a name to methods in politics. The eomrr.un remark of t'.-.ose who knew him only hy repute is " Cent per Cent, Cent per Cent, the money lenrler is ilead. " Zealous for his farthing Asa Fisk may have been, and in a grasping posture was he photographed in the opinión of his fellows generally, but in this lender's nature was a kindly, oven a generous phase, and tliere are tears that he is dead. For Aüa Fisk was a Iovlng man to his own, a liberal parent and husband, and, in stealth, he made charitable glfts that might astonish those who were caüed upon to pay to the last dollar the debts they incurred when in stress. Indeed, in such contradlctioa were the aspects of this man that one cannot bring them into harmony unless he applies one lens to his business life and another to his domestie life. Asa Fisk was one man to his debtors and another man to his family. His character is to be read from his ancestry and the strugglps of his eariy life. He was a farniPi's boy in New England, born on Christmas day, 1818, at the town of Holliston, Mass., and until 14 years of age he lived and workcd on his father's farm. Toen he made his way to Boston, and for a wage of $3 a week worked in a grocery store. With thrift that showed higher developmeiit in his later years, Fisk bought board and lodging and clothlng from his meager compensation. Seeking advancement, he sought and obtained employment with the firm of Daniel Kimball & Co., dealers in tailors' goods and supplies. His income at first was $100 a year. His industry and intelligence caused bis salary to b-3 advanced and his responsibilities to be Increased. He moved steadily forward and before he was 30 years of age was a partner. Subsequently Fisk became the sole owner of the busines3. His fortune developing be turned to railroads and politics, hiiildin the Eaat Boston & Suffolk railroad and servlng a term in the state senate of Massachusetts. In 1863 he camt to California for hls health. That visit determined the location of hls residence. Returnlng to Boston he sold out nis business interests, and with a pile of ready money, amountng to about $75,000, he carne, in 1869, to San Franciscp to live. He started in business as a money lender, by his methods gained the notoriety that gave an unpleasant attachment to his name. He announced the rate of interest upon which he would lend money 3 per cent a month, or 3 per cent a week, according to the applicant or Fisk'.s judgment of him, but always rompouEded. The applicant might take the money or leave it. as he chose, but usually he look it, for few went to Asa Fisk's dingy office on Montgomery street except in diré need. As a creditor he was relentless. He rigorously fulfilled every engagement he made, and he expected every other man to do Hkewise. If a de'ut of $150 grew to $15,000 by the increment of compound interest he used every means known to the law to collect the last cent. Withal he loaned money to distressed applicanta when none others would listen to their requests. A clerical coat on a borrower was always deemed sufficlent security for a loan - of course, at the usual rate of interest - and several young lawyers might have gone hungry if Asa Fisk had not regarded their pride as collateral for an advance. Asa Fisk gained a large fortune, amounting probably to about $L00,000. Most of his money was carefully invested in productive real estáte and all or nearly all of this real estáte he transferred to his wlfe by deed. In the probate court the estáte of Asa Fisk, deceased, will appear o small meaeure. Burglars entered the residence of M L. Howell at Cassopolis and lansaoked the house from top to bottom, carrylng aWay all the articles of value, including several pieces of eil ver ware atul about $6 in money. Tommy Cooper, of Detroit, established a r.ew world's record for a mile, flying start, at Detroit. He made the mile in the temarkuble time of 1:41 1-5. chipping 4 4-5 seconds off hls record made at RActne, Wis., Jnly 3,