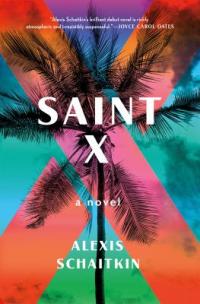 Saint X * by Alexis Schaitkin (in downloadable OverDrive eBook and audiobook)  On the last night of their family vacation on the Caribbean island of Saint X, college-aged Alison Thomas disappeared, and her body was later discovered in a remote cay. Two local men, employees of the resort, Clive Richardson and Edwin Hastie last seen at a watering hole with Alison were arrested but were released for lack of evidence.

Eighteen years later, Alison’s younger sister Claire who was only seven at the time of the incident, is now working in Manhattan. One night, she finds herself in Clive Richardson’s cab. Obsessed with learning what happened to Alison, she stalks Clive and embeds herself in his life. As she waits for the slip that will reveal the truth, an unlikely attachment develops between them.

“As the novel gradually shifts to Clive's point of view, Schaitkin subverts the other characters' assumptions about the lives and intentions of strangers.” (Publishers Weekly)  Most striking of all is Alison’s diary, astonishing in its raw depiction of a beautiful, changeable, provocative girl of eighteen at a turbulent moment of identity formation.

“This killer debut is both a thriller with a vivid setting and an insightful study of race, class, and obsession.” (Kirkus Reviews)

Check out the EW interview with the author, and the The Washington Post book review.

For readers of Emma Cline’s The Girls and Lauren Groff’s Fates and Furies. You might also enjoy Mathilda Savitch by Victor Lodato and Sister by Rosamund Lupton.