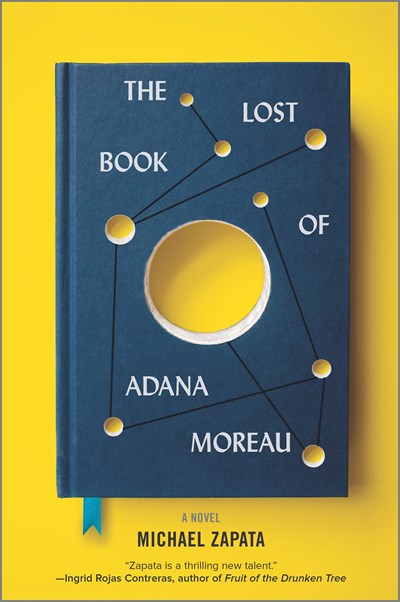 The Lost Book of Adana Moreau * * *   by Michael Zapata (in downloadable OverDrive eBook and audiobook) is the unlikely story of how two strangers are connected by a manuscript destroyed decades ago. This “an enchanting blend of history, science, and fairy tale” (Booklist) is also about the preservation of memory, the resilience of the human spirit, the bind of family, and the power of friendship.

New Orleans, 1929.  A Dominican immigrant, identified only as Dominicana, married to a pirate, wrote The Lost City, a science fiction masterpiece about alternate realities, but she fell gravely ill before the sequel A Model Earth, could be published. The author instructed her son, 10-year old Maxwell, to burn the only copy of the manuscript upon her death.

Chicago, 2005. Saul Drower just lost his grandfather Ben, who adopted him after his parents were killed in a terrorist attack when he was just 5. Among Ben’s effects was a package addressed to theoretical physicist Dr. Maxwell Moreau at a university in Chile. When the package returned undeliverable, Saul saw that it was a manuscript to A Model Earth. With the help of his investigative journalist friend Javier Silva, they tracked down Maxwell to New Orleans. Hoping to fulfill his grandfather’s last wish and to unearth Ben’s link to the manuscript, Saul and Javier drove right into a city laid waste by Hurricane Katrina.

“A heady literary and genre-bending novel for fans of Jorge Luis Borges, Carlos Fuentes, and Adolfo Bioy Caseres.” (Library Journal) Check out the reviews in the The New York Times and NPR.