Fabulous Fiction Firsts #732, “Here the oppression of women is very subtle... But here it is done psychologically and by education.” ~ Nawal El Saadawi 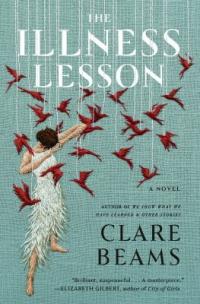 Named one of the most anticipated debuts of 2020, The Illness Lesson * *  by Bard Fiction Prize winner Clare Beams (in downloadable OverDrive eBook and audiobook) is what the New York Times Book Reviewer called “(a)stoundingly original.”

Among the students was Eliza, whose father, Miles Pearson penned The Darkening Glass, a popular gothic romance rumored to be autobiographical, and involved a beautiful young woman, modeled after Caroline’s mother. When the students, one after another, began to manifest bizarre physical symptoms of rashes, fits and sleepwalking, Caroline suspected Eliza, until she herself fell victim to the illness. Fearing reprisal from the parents, Samuel sent for his friend Dr. Hawkins, whose exploitative and malevolent treatments made Caroline question the judgment and integrity of those she trusted.

“This suspenseful and vividly evocative tale expertly explores women's oppression as well as their sexuality through the eyes of a heroine who is sometimes maddening, at other times sympathetic, and always wholly compelling and beautifully rendered.” (Booklist)

Soon to be released is Catherine House * * by Elisabeth Thomas, (The June Indie Next List), gothic-infused debut of literary suspense, set within a small, highly selective college, and following a dangerously curious, rebellious undergraduate, Ines Murillo who uncovers a shocking secret about an exclusive circle of students . . . and the dark truth beneath her school’s promise of prestige.

Readers might also like to explore: The Scent Keeper by Erica Bauermeister (in eBook and audiobook) - a moving and evocative coming-of-age novel about secrets and lies, families lost and found, and how a fragrance conjures memories capable of shaping the course of our lives; and The Signature of All Things by Elizabeth Gilbert (in eBook and audiobook) is about desire, ambition, and the thirst for knowledge, spanning much of the 18th and 19th centuries.