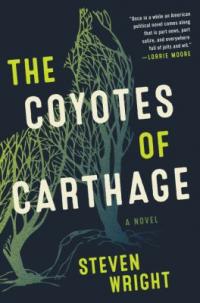 The Coyotes of Carthage by Steven Wright  (in downloadable eBook and audiobook) is a blistering political thriller, (a) “thoughtful, sharp-edged fare for the upcoming election year.”(Library Journal)

Political consultant (An)Dre Ross, instead of the prospect of making junior partner in his DC firm, is being dispatched to the backwoods of South Carolina, with $250,000 of dark money to introduce a ballot initiative on behalf of a mining company, a last ditch effort to save his career after his aggressive tactics in a recent gubernatorial campaign backfired. In 13 weeks, Dre must manipulate the locals into voting to sell their pristine public land to the highest bidder.

In God-fearing, gun-toting, flag-waving Carthage County (SC), Dre, being an African-American outsider, needs a straw man to collect the signatures needed to get on the ballot, so he hires local barkeep Tyler Lee and his pious wife, Chalene. They plan to disguise the land grab as a righteous fight for faith and liberty. In the process, lines are crossed, careers are ruined and lives threatened.

“Pungent with dark humor and cynicism, Wright's nuanced portrait shows how the campaign not only pulls apart the town but threatens to drive a wedge between Dre's career ambitions and his humanity. “ (Publishers Weekly)

“Wright (a clinical associate professor at the University of Wisconsin-Madison Law School, and a trial attorney in the Voting Section of the United States Department of Justice) has created a sharply contemporary Faustian tragicomedy with parallels to the TV series Scandal.” (Booklist)