Fabulous Fiction Firsts #735, “He had a confused sense that she must have cost a great deal to make, that a great many dull and ugly people must, in some mysterious way, have been sacrificed to produce her.” ~ Edith Wharton 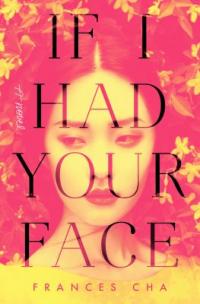 Called “one of the buzziest debuts of the year”(Vogue),  If I Had Your Face *  (in downloadable eBook and audiobook) by Frances Cha (Dartmouth, MFA Columbia), is set in contemporary Seoul, the Plastic Surgery Capital of the World, where four young women in an apartment building, struggle to make their way in a male-dominated society, defined by the impossibly high standards of beauty.

Beautiful Kyuri, the object of desire and envy, entertains businessmen while they drink at 10%, an exclusive “room salon”. Much sought-after with the rich clientele, she is racking up debts for additional surgeries and beauty treatment to maintain her status.  Her roommate Miho, a talented artist who studied in New York on a scholarship, is trying to exorcise the suicide of a good friend through her work, and to establish a foothold in Seoul’s competitive art market.

Down the hall lives hairstylist Ara, mute from a brutal attack and bullied at work, is hopelessly infatuated with the star of a K-pop boy band. Her roommate, beauty-obsessed Sujin is counting on extreme plastic surgery to change the course of her life. One floor below is Wonna, a married office worker, desperate for motherhood, though she is not sure how she could afford to raise a child in the cutthroat economy.

When Kyuri’s impulsive blunder with a client threatens her livelihood; Miho’s discovery that her boyfriend - the heir to one of Korea’s biggest companies is less than genuine; and Wonna’s husband leaves her in her darkest hour, it is their friendship, however tentative and mercurial, that may well be their saving grace.

“(Former travel and culture digital producer for CNN in Seoul) Cha navigates the obstacles of her characters' lives with ease and heartbreaking realism, showing the lengths these women are willing to go to pursue their dreams in a country where they are told they "do not live for tomorrow." This is an insightful, powerful story from a promising new voice.” (Publishers Weekly)  Check out The Washington Post review.