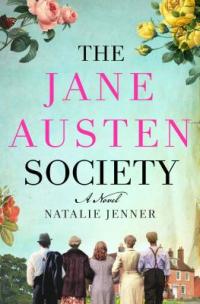 “My idea of good company...is the company of clever, well-informed people, who have a great deal of conversation; that is what I call good company.'  'You are mistaken,' said he gently, 'that is not good company, that is the best.” ~ Jane Austen, Persuasion

The Jane Austen Society by Oakville (ON) bookstore owner Natalie Jenner (Bustle’s Pick and Indie Next Pick for May) is a must-read for fans of The Chilbury Ladies' Choir and The Guernsey Literary and Potato Peel Pie Society, a “charming and memorable debut, which reminds us of the universal language of literature and the power of books to unite and heal." ~ Pam Jenoff

1945, as England was trying to rebuild after WWII, a disparate group of individuals banded together to attempt something remarkable - to preserve both Jane Austen's home and her legacy.

For decades, tourists and Austen enthusiasts have made pilgrimage to the village of Chawton, to the country cottage on the Knight family estate, where Austen spent the last eight years of her life, and where she penned the last three of her novels.

As the estate is about to be passed onto an unidentified male heir with the death of old Mr. Knight,  the Jane Austen Society members - a farm laborer, a housemaid, the local doctor, a young widow, the spinster Frances Knight, the Knights' solicitor, a Hollywood movie star and her Sotheby's auctioneer friend must attempt the impossible - to raise enough funds to save the Knight library where Jane certainly would have made extensive use of, and to turn her cottage into a museum.

“Just like a story written by Austen herself, Jenner's first novel is brimming with charming moments, endearing characters, and nuanced relationships, all largely set within and reflecting the often intrusive atmosphere of a small country community.” (Booklist)