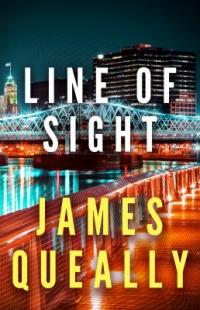 Award-winning crime reporter for the Los Angeles Times, James Queally has covered hundreds of homicides, as well as national use-of-force controversies and the Black Lives Matter Movement.  Line of Sight * * is his debut novel.

Former Newark crime reporter Russell Avery now works as a private investigator, mostly running interference for cops facing disciplinary reviews, or in crosshairs of the  Internal Affairs Department. He is indebted to his contacts on the Newark PD for fast-tracking his PI license when he was furloughed and grateful for the work. That is until his friend Keyonna Jackson, a social justice activist, introduced him to Austin Mathis whose son Kevin, a low-level drug dealer was killed by the police. What piqued Russell’s interest was a troubling cell-phone video Kevin took that showed snippets of questionable use-of-force of another young black man.

“Avery plunges into a miasma of police corruption and reconnects with former girlfriend Dina, a reporter bent on unmasking crooked cops. The deeper he investigates, the more Avery becomes convinced that he's been looking for heroes and villains in a city that breeds only survivors--and where protecting and serving are too often reduced to doing evil so that good may result. This scalding exposé of human failures, in which friendships go tragically sour, powerfully updates Raymond Chandler's mean streets. Queally is definitely a writer to watch.” (Publishers Weekly)