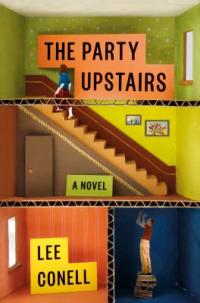 Lee Conell’s The Party Upstairs : A Novel * is set in an Upper West Side co-op building over the course of a single day. An early morning argument between the building’s super, Martin and his grown-up daughter, Ruby sparks a crisis that will, by day’s end, change the course of many lives.

24 year-old Ruby is back living in the basement apartment with her parents, after 4 years at a prestigious small liberal arts college failed to land her a job, and her trust-fund boyfriend broke up with her.  The novel opens on the day Ruby is scheduled for a job interview at the American Museum of Natural History, courtesy of her “oldest best friend” Caroline, while her father fields calls from demanding and demeaning tenants with their innocuous and embarrassing requests, constantly fearing for his job. Caroline’s family occupies the penthouse but despite their economic disparity, the girls are able to keep up a close friendship since childhood. Now Caroline is a successful artist and is throwing a party at her father’s penthouse, a party Ruby looks forward to and dreads in equal measure.

“Conell’s debut perfectly captures the co-op’s ecosystem and the ways class informs every interaction, reaction, and relationship inside it...A slow-burning debut that keenly dissects privilege, power, and the devastation of unfulfilled expectations.“(Kirkus Reviews)

On July 29th, the author will be in conversation with author Margot Livesey at At Home with Literati series of Virtual Events.

May we also suggest Apartment by Whiting Award-winner Teddy Wayne. It is a New York Times Editors' Choice, longlisted for the 2020 Simpson/Joyce Carol Oates Literary Prize, and one of Vogue’s Best Books of 2020 So Far, “a careful meditation on class and power." 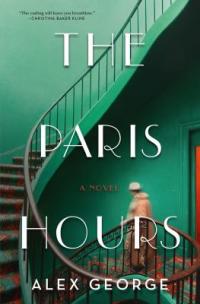 Alex George’s The Paris Hours (also in downloadable eBook and audiobook), is his first historical novel set in Paris where he once practiced law. Paris between the wars teems with artists, writers, and musicians (Gertrude Stein, Ernest Hemingway, Marcel Proust, and Maurice Ravel), a glittering crucible of genius. On one summer day in 1927, amidst the dazzling creativity of the city’s most famous citizens, four regular persons are searching for something they've lost, or on a quest to right a past wrong.

When Marcel Proust instructed his maid Camille to burn all of his notebooks, she saved one for herself, but is now desperate to find it before shameful secrets are revealed.  Souren, an Armenian refugee, performs puppet shows for children that are nothing like the fairy tales they expect. Lovesick artist Guillaume, down on his luck, is running from a debt he cannot repay.  And Jean-Paul, a journalist dreaming of America, interviews expats, because his own story is too painful to tell.

“George expertly crosscuts between various plots, coaxing them closer and closer as evening draws on. The tinder has been set and the fire is lit as the action converges on a raucous cabaret in Montmartre. “It’s not just objects that warp and disappear in the flames’ embrace,” it’s the characters’ notions of what they’re capable of doing, of what sort of people they’ve become in this combustible present.”(The New York Times Review)

Here is a list of other novels that take place in a single day: Saturday by Ian McEwan; Mrs. Dalloway by Virginia Woolf; The Hours by Michael Cunningham;  Lillian Boxfish Takes a Walk by Kathleen Rooney; and Today Will Be Different by Maria Semple.