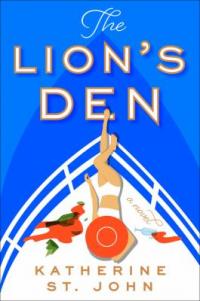 In need of escapism? Look no further than The Lion's Den by Katherine St. John, named one of Library Journal’s Debuts to Watch, “(a) diverting poolside-ready page-turner.” (Publishers’ Weekly)

When Summer Sanderson, her best friend since high school, invited her on an all-expense paid week in the Mediterranean aboard her billionaire boyfriend's yacht, struggling-actress/cocktail-waitress Belle Carter just could not turn the offer down. But the minute she stepped aboard the Lion’s Den, she began to have second thoughts. Her passport, cell phone were taken away and she found herself locked in her cabin at night. Then she saw mysterious visitors boarding the yacht in the dead of night, and every move she and her fellow passengers made were scheduled and monitored by their host, John Lyon.

When her cabin-mate, a young brassy sexpot went overboard after a vicious argument with Summer,  Belle knew she must keep her wits about her - and her own big secret closely hidden - if she were to make it off the yacht alive.

"Fans of Liane Moriarty and Jessica Knoll will devour this story of beautiful people with horrible secrets.” (Booklist)