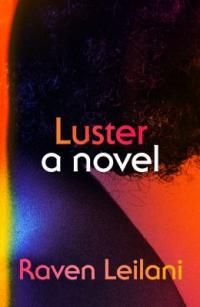 Luster * * by Raven Leilani (also in downloadable eBook and audiobook) is one of Entertainment Weekly’s 20 late-summer must-reads; Vogue’s 7 Books We Can’t Wait to Read in August; and New York Times called it “perhaps the summer’s most touted debut.”

23 year-old Edie is stumbling her way through her twenties. An art school dropout with crushing student loans, she now works as an assistant at a children’s book publisher, hardly able to afford sharing a rat-infested apartment in Bushwick. She meets Eric Walker online, a married white digital archivist twice her age who professes to have an open marriage. When Edie crashes the couple’s anniversary party, she meets Rebecca, a VA medical examiner, and Akila, their adopted daughter.

When Edie is fired from her job, in part due to  office-hours promiscuity, and is evicted from her apartment, Rebecca invites Edie to stay in their New Jersey home while Eric is away. As Edie earnestly tries to make herself useful with Akila who is having a tough time adjusting to the all-white community; and to find work (clown school?),  “all the while, the dynamics among the four of them keep shifting, an unstable ballet of race, sex, and power.”

“Edie's ability to navigate the complicated relationships with the Walkers exhibits Leilani's mastery of nuance, and the narration is perceptive, funny, and emotionally charged. Edie's frank, self-possessed voice will keep a firm grip on readers all the way to the bitter end.” (Publishers Weekly)

“Edie’s defeated, I-can’t-even tone has become something of an institutional voice for millennial writers, especially women: Jia Tolentino, Patricia Lockwood, Catherine Lacey, and Ottessa Moshfegh have all merged humor with anger about the gender and economic inequities their generation faces.

Luster is distinguished by its focus on race, which raises the stakes for the story. The climax emphasizes that for all of her wit and flexibility, Edie is ultimately a Black woman in a white neighborhood. She’s treated as an assistant, then an interloper and finally an invader.” (USA Today, ★★★½ out of 4)