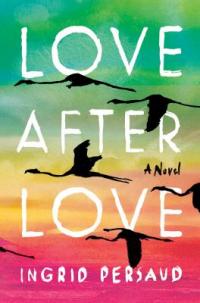 Love After Love * *  is award-winning short story writer Ingrid Persaud’s debut novel, which Entertainment Weekly called “a window into Caribbean literature and a wider lens on immigration, race, and sexuality. Mostly, though, it’s just a great story; funny, tender, and true.” Set mostly on the island of Trinidad, it traces the lives of a makeshift family over 2 decades.

After Betty Ramdin’s abusive alcoholic husband Sunil dies, she takes in Mr. Chetan, a math teacher at the school where she is an administrator as a lodger. Kind, polite and adept in the kitchen, Betty and her five-year old son Solo take to him immediately, and gradually they form an unconventional family, loving and supportive of each other.

When Betty’s attempt to seduce Mr. Chetan fails, he comes out to her, trusting her with a secret that could mean jail or worse in Trinidad’s homophobic culture. Then by chance, Solo overhears Betty confiding in Mr. Chetan a secret so powerful that it drives him to leave Trinidad, vowing never to return. Living in New York with Sunil’s brother Hari and his family, he works menial jobs, available to the undocumented, lonely and an easy prey to grifters. Estranged from each other, Betty and Solo are buoyed by the continuing love and friendship of Mr. Chetan, until his own secret is uncovered with heartbreaking repercussions.

“Beautifully written, the novel is told in Trinidadian dialect ("You here bazodee over a man you ain't seen since he was in short pants"). The skilled treatment of the characters brings them to vivid life, as it does the richly realized Trinidadian setting. “ (Booklist)

Read-alike suggestion: The New York Times review of Love After Love by Gabriel Bump reminds me of Everywhere You Don't Belong, (2020) his debut novel, set in Chicago, which Tommy Orange called "(a) comically dark coming-of-age story, .... (a) meditation on belonging and not belonging, where or with whom, how love is a way home no matter where you are.”