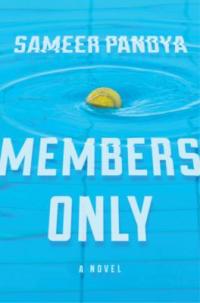 Members Only *  by Sameer Pandya (also available in downloadable eBook and audiobook) chronicles Raj Bhatt’s terrible, horrible, very bad week, triggered by one careless, unfortunate, regrettable remark made during a meeting at his members-only club.

Raj, a professor of Anthropology at a California university, married, and father of 2, is the only nonwhite member of a private tennis club. At a prospective new member interview, his effort to connect with an African American couple comes across as a racist joke. Immediately, those he considers his friends turn on him, nevermind for years, he has silently endured slights and snubs from the membership.

The next day, a group of right-wing students at the University organizes a protest against him over objections to his lectures on the history of American slavery (labeling him as a reverse racist), threatening the safety of his family, his livelihood, and his integrity.  Growing up as a bicultural Indian American immigrant, Raj is often unsure of where he belongs, now he finds it increasingly difficult to navigate the complicated space between black and white America.

“This realistic, character-driven novel with multiple, exceptionally well developed, threads of suspense engages contemporary identity politics and what it means to belong - to a club, to a racial group, to a country, and to various cultures and subcultures.... Pandya's writing here is smooth, clear, funny, and often subtly beautiful. Members Only is the thoughtful page-turner we need right now.” (Booklist)