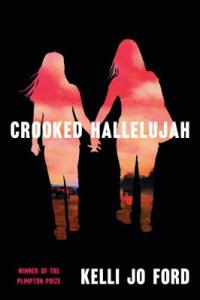 Crooked Hallelujah * * (also available in downloadable eBook) by Paris Review's Plimpton Prize winner Kelli Jo Ford, has been named one of New York Times Editors' Choice. In a series of linked stories, it follows a family of Cherokee women, proud and stubborn, who sacrifice for those they love, amid larger forces of history, religion, class, and culture.

The narrative opens in 1974, in the Cherokee Nation of Oklahoma when 15 year-old Justine finds herself pregnant after being raped by a local boy. Abandoned by her father, she bristles under the watchful eyes of her mother, Lula and Granny, devout members of the Holiness Church where her uncle is the minister.  Wanting to reconnect with her father, she moves to the Red River region of Texas, hoping to start a new, more stable life with daughter, Reney.

Against the backdrop of oil bust of the 1980s, a grown-up Reney finds herself unmoored from her family in Indian Country. After several miscarriages, supporting a physically abusive husband, holding down a job at the local Dairy Queen, life is bleak. “Later, Ford gives Reney opportunities to pursue a healthy relationship, an education, and a stronger understanding of the legacy of her family and heritage. Ford's storytelling is urgent, her characters achingly human and complex, and her language glittering and rugged. This is a stunner.” (Publishers Weekly)

“A tender and ambitious praise-song of a novel about a family's fight for survival, love, and home.“ (Kirkus Reviews) 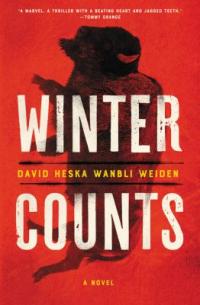 Winter Counts * (also in downloadable eBook and audiobook) by David Heska Wanbli Weiden is set on the Rosebud Indian Reservation in South Dakota, where the American judicial system and the Tribal Council often fail to mete out justice. In those instances, one would look to Virgil Wounded Horse, an enforcer-for-hire to deliver punishment.

A reformed alcoholic, Virgil is now guardian to his 14-year-old nephew, Nathan after a car accident killed his sister three years ago. When Nathan is caught with enough prescription pills in his school locker and faces 30 years in prison, Virgil’s vigilantism suddenly becomes personal.

With the help of Marie Short Bear, his ex-girlfriend & the councilman's daughter, they must find out how heroin makes its way into the reservation and prove Nathan's innocence. Their investigations  lead them to Denver and a drug cartel.

“The novel twists delicately around various personal conflicts while artfully addressing issues related to the politics of the reservation. Weiden combines funny, complex, and unforgettable characters with strong, poetic prose (“This was the winter of my sorrow, one I had tried to elude but which had come for me with a terrible cruelty”). This is crime fiction at its best. “ (Publishers Weekly)

“Weiden's series-launch sheds much-needed light on the legal and societal barriers facing Native Americans while also delivering a suspenseful thriller that builds to a bloody climax. A worthy addition to the burgeoning canon of indigenous literature.” (Library Journal)