Fabulous Fiction Firsts #757, The Other Casablanca 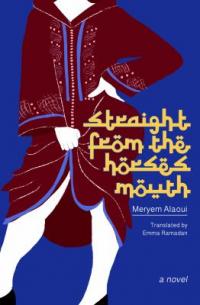 Stoic without being bitter, brutally honest without being sentimental, Jmiaa recounts her courtship with the devilishly handsome Hamid, their marriage against the wishes of her family, and how once Hamid moved them to Casablanca, he began to pimp her out to his friends to finance a constant stream of get-rich schemes. Now 15 year later, Jmiaa still works the same street and struggles to earn enough money to support a young daughter and Hamid who has since been smuggled into Spain. Life, however, is not without its pleasures - the quiet moments with her daughter, watching tv, drinking and gossiping with the other girls, and the occasional drive with a favorite client.

Unexpectedly, Jmiaa is introduced to Chadlia, a Dutch expat. filmmaker she calls “Horse Mouth” because of her toothy smile, who presents her with an exciting opportunity. Chadlia is making a film about the working women of Morocco, and eventually casts Jmiaa as the lead. Over the next three years, her life changes in ways she never could have imagined.

“Jmiaa's Casablanca is full of corrupt cops and exploitative men who take advantage of the prostitutes' vulnerability, but it is also full of friendship, laughter, and triumph….Alaoui's shimmering prose is funny and original; Jmiaa, noting Horse Mouth's Arabic is unusually fluent for an immigrant, says, "Normally it's like their tongue is in physical therapy: it needs crutches to get to the end of a phrase." Alaoui's tale is one to savor for its language and its verve.” (Publishers Weekly)