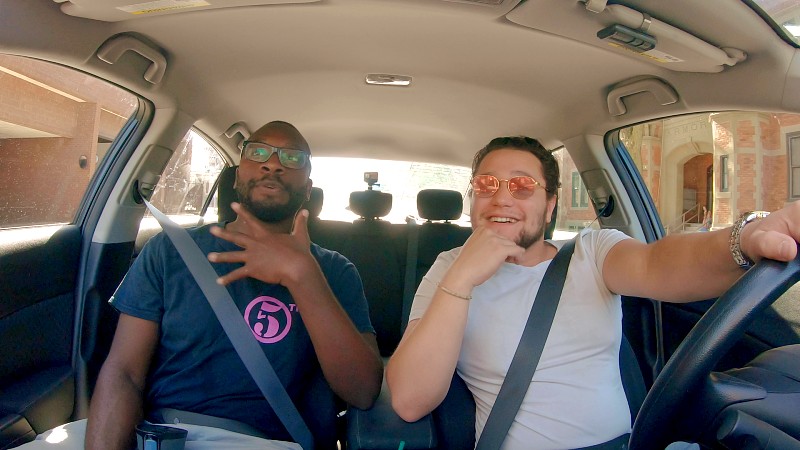 Artists performing songs being driven around in a car by a congenial host. Sound familiar?

Host Nadim Azzam doesn't fuss around with wacky comedy. He gets right to the point with his guests, reciting a short bio, picking the musician up in his car, letting them perform, and concluding with a brief interview.

The first episode of this YouTube show clocks in at 4 minutes, 57 seconds. A quick ride indeed.

In the Whip Jams debut on December 9, Ann Arbor's Ki5 performs a song in Azzam's vehicle by sampling his voice with the Boss RC-505 Loopstation sitting in his lap. That kind of compact setup works fine for him, but some future episodes will feature artists holding acoustic instruments—might get a little cozy in Azzam's Honda Civic.

You might be thinking, "How are they all riding in the same car, maskless, during a pandemic?"

All episodes of Whip Jams' first season were recorded before Covid-19, but Azzam is already planning season two—even if we're still mired in the pandemic.

"We're planning and preparing Season 2 so that we can execute safely as soon as accurate rapid testing is available and in accordance with state guidelines," Azzam wrote in an email. "In the meantime, there are a couple of artists in our quarantine pod that can be safely filmed for Season 2."

Azzam has no shortage of ideas about who he'd like to see appear in Season 2 even if he's not ready to give up any names.

"I've got a list of artists we'd like to work with, but nothing set in stone that can be shared at this time," he wrote. "We plan to bring in more Ann Arbor artists and continue expanding to feature more artists from around the state. We'll also be running submission contests and artist wishlists for upcoming seasons so fans can offer suggestions."

The Ann Arbor-based Azzam is a talented hip-hop-influenced singer-songwriter in his own right and he's been hard at work recording music this year.

"I'm working on my first full-length album," Azzam wrote. "The timeline isn't finalized yet but I expect music to start rolling out in the first half of 2021."

If Azzam got someone else to drive his ride, maybe he could appear on Whip Jams.