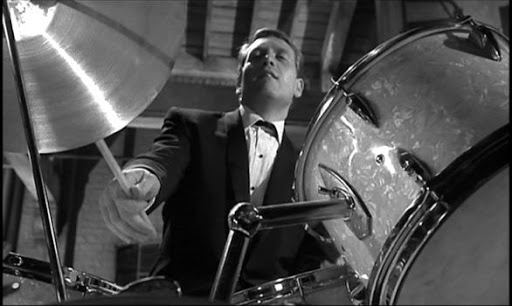 A midnight jam session becomes a hotbed of emotional manipulation and ruined reputation in this loose rewrite of Othello set in the London jazz scene. Musicians congregate to celebrate the wedding anniversary of renowned pianist Rex and retired singer Delia, but one guest plots to drive them apart and lure the wife back to the stage for his own gain. Patrick McGoohan is incandescent as the Iago of the piece, an ambitious, amoral drummer who single-handedly drives the plot as he circulates among the partygoers, gaslighting a succession of gullible hipsters. All Night Long never lags as it moves swiftly and nearly in real time, the party shifting perceptibly from gaiety and camaraderie to paranoia and suspicion. Featuring cameos and performances from jazz legends like Charles Mingus, Dave Brubeck and Tubby Hayes, the music seeps through every scene and even helps identify character — McGoohan’s frenzied drum solos expose the obsession at the center of his role better than any dialogue.

British director Basil Dearden was known for socially-progressive message pictures, although All Night Long’s only political statement is its casual acceptance of interracial romance. The taut, gritty thriller Victim is another standout with blunter concerns, condemning Britain’s then-current anti-homosexuality laws, while Sapphire examines the fragile logic of racism and the breezy yet cynical The League of Gentlemen is a high-concept heist plot populated by disillusioned ex-soldiers. All four films were released on DVD by Criterion/Eclipse, and each is available through the AADL for the forward-thinking cineaste.