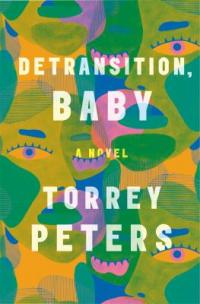 Detransition, Baby : A Novel * * (also available in downloadable eBook and audiobook) by Torrey Peters is described by Entertainment Weekly as “a tale of love, loss, and self-discovery as singular as it is universal, and all the sweeter for it.”

Reese, Ames and Katrina find themselves thrown together from an unexpected pregnancy. Trans woman Reese, a 30something Midwestern transplant in NYC, is entangled in an affair with a kinky, dominant, and married man she refers to as “the cowboy”, while desperately wishing for a child. Three years ago, she was in a loving relationship with Amy who has since detransitioned (returning to the gender assigned at birth after living as another gender) to Ames, and is romantically involved with his boss, Katrina.  When Katrina, badly scarred in a divorce finds herself pregnant, she looks to Ames for support and reassurance that she won’t have to raise their child as a single parent.

While Ames cannot see himself as a father, he relishes being a parent. Knowing how much Reese wants a child, he proposes that the three form an unconventional family.

“There’s no question that there will be much that’s new here for a lot of readers, but the insider view Peters offers never feels voyeuristic, and the author does a terrific job of communicating cultural specificity while creating universal sympathy... Smart, funny, and bighearted.” (Kirkus Reviews)

Recently, the Rumpus talked with Torrey Peters (MFA, University of Iowa; Masters in Comparative Literature, Dartmouth). She shared that “(t)he title is a pun, but I also think of it as a condition, where the comma is a painful knife’s edge that you walk as a trans woman. I wanted to fall off in one of two directions: to one side, if I could have a baby, be a mother, I think I would have felt a kind of legitimacy. In the other direction, if I could have found out a way to live comfortably in some kind of detransitioned state. These two options are represented by the characters.”