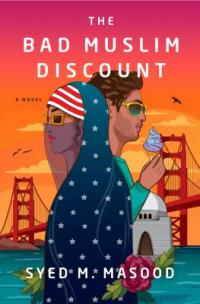 The Bad Muslim Discount * * by Syed Massod (also available in eBook and audiobook) is a well-observed and comic novel about two Muslim families from Pakistan and Iraq finding their way in contemporary America.

As Pakistan grows increasingly conservative and embraces Islamic fundamentalism, the Faris family moved from Karachi to Fremont (CA) looking for a fresh start. While his devout mother and model-Muslim older brother Aamir were quickly adopted by the local Muslim community, 14 year-old Anvar, rebellious and wisecracking was more interested in fitting in, even if it meant being a bad Muslim. In college, his irreverence made him an outcast with fellow Muslim students, including his (very secret) girlfriend Zuha. He transferred out East and eventually got a law degree.

In alternating chapters, Safwa, a young girl living in war-torn Baghdad with her grief-stricken, conservative father will find a very different and far more dangerous path to America. Anvar and Safwa became neighbors in a SF apartment complex, at the largesse of a landlord who is happy to offer a “good Muslim discount” as long as you don’t mind the rundown, mold-infested units. Though Safwa, now called herself Azza, is engaged to a bully hand-picked by her abusive father, they fell into an easy relationship. When Zuha becomes engaged to Aamir, now a doctor;  and Safwa’s desperate and poorly-conceived plan to gain her freedom attracts the attention of Homeland Security, their lives and that of their families are irrevocably transformed.

“A born storyteller, Masood has crafted a fast-paced page-turner with plenty of insightful commentary on religion, family, love, and national politics in this debut novel that is expertly written and a joy to read; highly recommended.” (Library Journal)