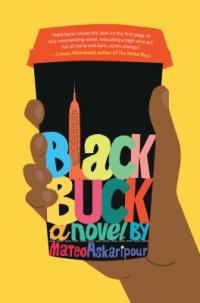 Black Buck * * * (also available in downloadable eBook and audiobook) by Mateo Askaripour, a darkly comic novel, is “25.8% autobiographical”.  (Check out Scott Simon’s interview with the author on NPR)

The title, derived from an old racial slur, is written as a sales manual, with hints and tips sprinkled throughout, intended to “help(ing) people…(b)lack and brown people that have been others, especially in the workplace. And this could be true for anyone that’s felt otherized, whether that’s due to sexual orientation, gender expression, religion, or race.” (Kirkus Reviews)

Once the valedictorian of Bronx Science, 22 year-old Darren Vender is a barista at a Midtown Starbucks. Living with his mother in a Bed-Stuy brownstone, and hanging out with his girlfriend, Soraya, he knows his lack of ambition is a disappointment to his mother. An inexplicable impulse to suggest a different drink for a customer changes all that.

Rhett Daniels, the silver-tongued CEO of Sumwun, NYC’s hottest tech startup, sees potential in Darren, and offers an invitation for Darren to join his elite sales team.  Before grasping the nature of the company (a platform for virtual therapy sessions), Darren recreates himself as (Star)Buck, a ruthless deal-closer, and a super-salesman.

“While he tries to square his growing discomfort in his new role in this strange, morally dubious workplace with the expectations of his family and friends, tragedy strikes, and Darren secretly begins a rival start-up focusing not only on training people of color to enter the white world of elite sales but also to revolutionize the industry. Askaripour has created a skillfully written, biting, witty, and absurdist novel that sheds light on racism, start-up culture, corporate morality, media bias, gentrification, and many other timely, important themes. Askaripour is an author to watch.”  (Booklist)