From the Fifth Estate to Ann Arbor: Harvey Ovshinsky's new memoir recalls his agitating and publishing days in Detroit 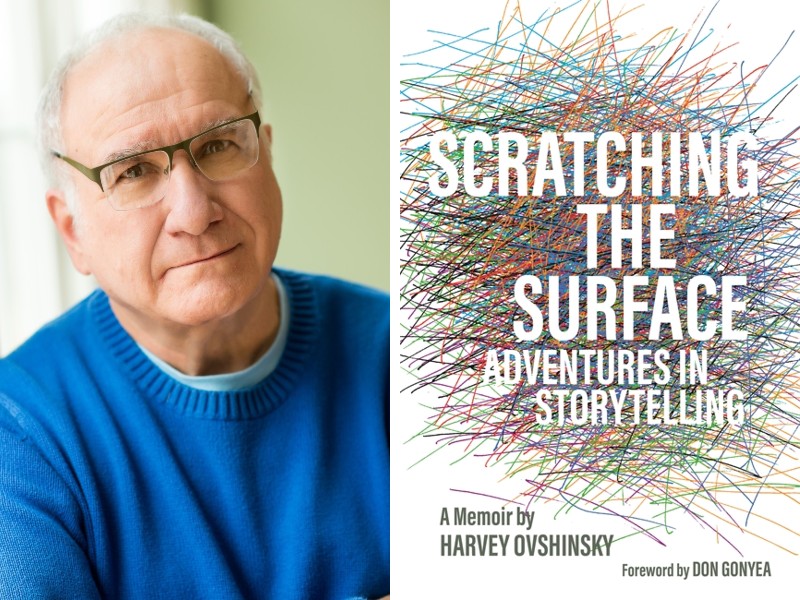 Ann Arbor’s Harvey Ovshinsky faced a problem when he settled in to write his memoir, Scratching the Surface: Adventures in Storytelling.

“I sat down with Kathryn [Wildfong] at Wayne State University Press, and she said, ‘Oh, my God, Harvey, there are three or four different books in here. You’ve got to pick one,’” Ovshinsky said. “I have all these dots and I really felt the need to connect them, and I knew I could. … What they all had in common was my need to scratch the surface. And that’s when [the book] came together.”

The book's focus was originally a puzzle to solve because Ovshinsky is a lifelong restless spirit.

After graduating from Detroit’s famed Mumford High School (and briefly moving with his mother to Los Angeles), Ovshinsky founded The Fifth Estate, an underground newspaper based in Detroit. He also became part of Detroit’s underground radio scene by hosting talk shows on WABX-FM, made short documentaries for local networks and public television, and spent time teaching kids and adults about writing.

“I’ve never done anything twice,” said Ovshinsky. “But after spending so much time all these years … asking other people questions, and spinning my yarns with other people’s threads, I felt a bit like a cheat. It’s like I’d say, ‘Tell me what’s below your surface, let me scratch it, but please don’t expect me to let my cat out of the bag.’ … I felt it was time for me to spill my own beans.”

The resulting book feels like a one-man tour of Detroit’s underground media history as well as a candid account of the joys and heartache Ovshinsky has experienced as an artist.

Scratching isn’t just a highlight reel though; readers also learn about projects that never found their way into the world.

“I didn’t want [the book] to be too discouraging,” said Ovshinsky. “There’s a balance there. … There’s an element of endurance and persistence. It’s required if you want to live a creative life. And I was hoping to communicate some of that without whining.”

“It took a year and a half, maybe two years, to write a bad book, and then it took me two more years to write a good book,” Ovshinsky said. "The first drafts were angrier. I was much harder on my father, much harder on my mother—even tougher than I was on my executive producers, whom I’d fought with regularly. … So my tone got in the way. … But I always taught my students that the first draft is for you. Knock yourself out. … But the rewrite—the second, third, fourth, one-hundredth pass—those are for the reader.”

Much earlier in his life, with little more than some experience writing for school newspapers, Ovshinsky launched The Fifth Estate in 1965, with the idea of getting the era’s various youth communities—hippies, beatniks, druggies, politicos, communists, socialists, etc.—to connect and communicate with each other.

“My argument was, they’re all being arrested and spied on by the same police, the same FBI, so why not put together a newspaper that reached out and made these connections and bridges to these different groups?” said Ovshinsky. “It’s such a middle-child thing to do when you think about it.”

Though its debut was decidedly modest, The Fifth Estate grew more and more influential as time passed.

“The underground press in the '60s and '70s was the original media disruptor,” Ovshinsky said. “You think it’s crazy now? You should have been there when we published The Fifth Estate. At first, the News and Free Press just kind of ignored us. Then the editors and the photographers and artists started subscribing and reading and wanting to catch up on what they were missing. The corporate press was like a hand mirror, only showing what was in front of its face. … And here we were, with a full-length mirror, from our perspective, showing where society was at and where it was going.”

Taking the long view of his multifaceted life in the Detroit media world has been “an out-of-body experience” for Ovshinsky, but interestingly, the pandemic has had little-to-no effect on his creative work.

“This is what I realized about my father [inventor Stanley R. Ovshinsky] and me: when we get going, and we start feeling creative, and we’re having these big ideas—when we go on our space travels, we leave our loved ones behind,” said Ovshinsky. “So I always write as if there’s a pandemic. I’m pretty antisocial.”

Ovshinsky moved to Ann Arbor 17 years ago, but he nonetheless finds himself still dreaming about what he calls the “mother planet,” Detroit.

“I’ve had a push-pull relationship with the city all my life, as I did with my father, as I did with my parents, as I have with everything that’s important to me,” said Ovshinsky. “So I love living in Ann Arbor. I wouldn’t trade it for the world. This is home to me. But I also always look forward to closing my eyes and dreaming about Detroit.”