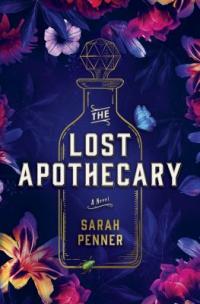 The Lost Apothecary (also available in downloadable eBook and audiobook) by Sarah Penner, one of the most anticipated debuts of 2021, will appeal to fans of parallel historical/contemporary narratives about women's lives.

After discovering her husband James’ infidelity, American Caroline Parcewell travels to London alone, for what was supposed to be a much-anticipated anniversary trip. On the banks of the Thames, she joins a mudlarking tour and finds an old apothecary vial that appeals to the historian in her. With the help of a librarian at the British Museum, she unearths links to the unsolved “apothecary murders” more than two centuries ago, and to Nella Clavinger.

A second generation apothecary and once a respected healer, Nella’s shop was hidden down a dark London alley, dispensing well-disguised poisons to women to use on men who wronged them in various ways.  On a cold February evening in 1791, Nella found her newest customer to be the precocious 12-year old servant girl Eliza Fanning. A friendship developed between the two that would eventually prove devastating, and would threaten to expose the many women whose names were recorded in her register.  And as Caroline’s life collides with Nella’s and Eliza’s in a stunning twist of fate, we would find that history often repeats itself.

“Penner finds clever parallels between Nella and Caroline, and avoids the pitfall of one storyline outshining the other—all three women have compelling tales, and while Nella’s business may not be on the up-and-up, her motives are understandable. Readers who enjoy Katherine Howe and Susanna Kearsley will be drawn to this promising, fast-paced debut.” (Booklist)