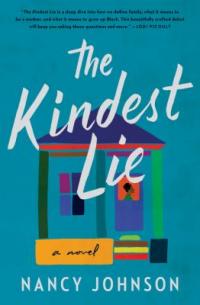 In The Kindest Lie *  by Nancy Johnson, “(g)enerational secrets, class divides, motherhood, and American life on the edge of political and economic change are all examined...” (Booklist)

As the Obamas are about to take up residence at 1600 Pennsylvania Avenue, Chicago’s Black communities are experiencing a new sense of optimism. Xavier, a mid-level manager is eager to start a family but his wife Ruth, an Ivy-league educated engineer is reluctant. Lately she has been crippled by guilt over what happened the summer before leaving for Yale on a scholarship. Abandoned by a mother addicted to drugs, she and her brother Eli were raised by kind and god-fearing grandparents who sacrificed everything to help her realize her potential. Unable to face Xavier with the truth, Ruth returns to the Indiana factory town she once called home, now plagued by unemployment, racism, and despair.

To move forward, Ruth knows she must first make peace with the past, most immediate is to track down the baby she abandoned.  But everywhere she turns, she encounters tightly held secrets and lies. Then she unexpectedly befriends Midnight, a young white boy who is also adrift and looking for connection.

“The Kindest Lie is a tale of how lies and omissions can shape and warp us. It is a story about reconciliation, set against a backdrop of racism and resentments. But more than anything, it is a meditation on family and forgiveness.” (Los Angeles Times)

Nancy Johnson, a native of Chicago’s South Side, is an Emmy-nominated, award-winning television journalist. A graduate of Northwestern University and the University of North Carolina at Chapel Hill, she calls Chicago home. The Kindest Lie is her debut novel.