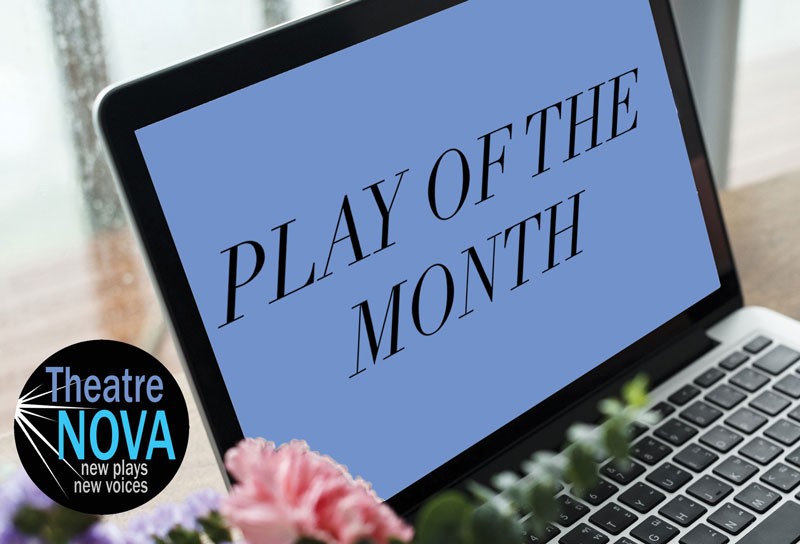 The Goldilocks Principle, though not regularly cited in reference to storytelling, can nonetheless be maddening for those who build narratives.

For how does a writer determine, in each scene, what’s too much information (thus bogging things down and killing suspense) and what’s too little (leaving audiences confused and frustrated)? How do you consistently land upon what feels “just right”?

It’s a notoriously tough needle to thread—particularly within the tight parameters of a 30-minute Zoom play—and this notion was something I thought about often while watching the third and newest entry in Theatre Nova’s Play of the Month series, Mortal Fools, by Ann Arbor-based playwright Catherine Zudak. (The live performance recording of Fools may be viewed—along with the first two entries in Theatre Nova’s Zoom play series, Jacquelyn Priskorn’s Whatcha Doin? and Ron Riekki’s 4 Genres—with the purchase of a $30 series pass, which also covers admission for the fourth and final play in the series, Morgan Breon’s The W.I.T.C.H., scheduled to be performed April 28 at 8 pm)

Fools opens with Afghanistan-based intelligence officer Captain “Mike” Michaels (Patrick Loos) calling his ex-wife, former journalist Missy (Alysia Kolascz), who’s been up much of the night with her fussy, feverish baby. Mike wants Missy’s input regarding a case he’s looking into, wherein an officer (Major Garland, played by Bryan Lark) stands accused of treason after getting romantically involved with a female Taliban journalist. Mike has Missy listen in and provide insights as he interrogates Garland, who’s initially reluctant to cooperate.

Zudak, a former CIA intern, makes a point of sprinkling some military lingo (civvey, possibles, listening post, etc.) into her script, placing us within the characters’ world at word level, and the parallels between Mike and Missy’s messy love story and Garland’s are clear.

But what makes Mortal Fools a challenge is the sheer volume of character details that come flying at you fast. We hear about how Mike and Missy married and divorced twice, as well as Garland’s first, and more meaningful marriage (which he ended when he learned he couldn’t have children). A month before Garland’s latest deployment, his ex-wife had another man’s baby, and one week before he left, he married his young second wife, who mostly just needed a means of escaping her stepfather.

In addition, Garland’s affair with the Taliban journalist isn’t, in itself, what gets him in trouble, but rather the fact that she helped his team avoid landmines when the convoy that preceded Garland’s was destroyed; and when Garland was initially questioned, he punched a superior officer because of the brutal violence committed against the journalist.

If you’re thinking there’s a lot to hold on to and process here, you’re not wrong. There are so many moving pieces that it’s hard to connect with any particular character or situation—despite director David Wolber’s guidance, and Loos and Kolascz’s convincing rapport.

Plus, this may all be a consequence of squeezing a large story into a too-small frame. Without having more room for the narrative (and the actors) to breathe, Fools feels like a work that demands close attention but lacks an emotional payoff.

And despite all the information we’re given, I still sometimes felt confused. Why, for instance, would Mike leave Garland alone in the interrogation room with a loaded weapon? (We’re told Garland may be suicidal, but this seems all the more reason to not make this reckless choice.) And why does Missy choose to hang on the phone in the middle of the night to listen to this military interrogation? Out of affection for her ex? The thrill of possibly solving a puzzle? Domestic boredom? It’s hard to glean exactly what’s at stake for her in this tale.

So Fools ultimately feels like a (bigger) work-in-progress, with Theater Nova’s Zoom production showing off the piece at its sapling stage: the parts are all there, and it may grow into something grand, but it still needs more time and space to grow into its own potential.