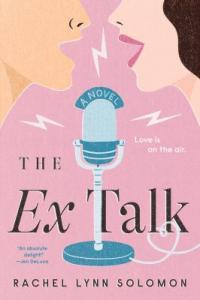 29 years-old Shay Goldstein, a producer at Pacific Public Radio in Seattle for 10 years, loves her job but lately, she seems to be at loggerheads with their new hire, Dominic Yun. With a freshly minted master’s degree from Northwestern’s Medill School of Journalism (which he never fails to mention in all conversations), Dominic immediately impresses the bosses with a big scoop on a City Hall scandal. With ratings down and the station struggling, in order to save their jobs, Shay pitches a concept - a weekly talk show where exes give relationship advice, live. Their boss decides Shay and Dominic are the perfect co-hosts, given how much they already despise each other, never mind they have never dated.

“As the show skyrockets in popularity, the fake exes become real friends, but a growing attraction might spell disaster. Shay and Dominic are brought to life with multilayered backstories...Witty dialogue meets steamy slow-burn tension while fun romance tropes (fake dating! there’s only one bed!) take a refreshing turn by making Dominic the less sexually experienced, and more emotionally open, of the two. A vibrant supporting cast of family, friends, and co-workers helps round out the plot. Delightfully romantic and emotionally uplifting.”  (Kirkus Reviews) 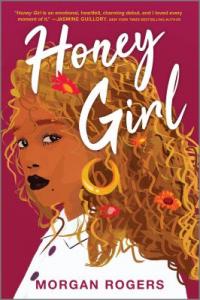 Honey Girl * (also in eBook and audiobook) by Morgan Rogers is “especially notable for its celebration of friendship, especially in queer communities, and for exploring the many ways relationships can be meaningful and intimate beyond romance... A strong romantic fiction debut that will appeal to readers looking for a story of true love via self-discovery.” (Kirkus Reviews)

28 year-old Grace Porter heads to Las Vegas with her girlfriends and roommates to celebrate her PhD in astronomy. After a night of revelry, she awakes to an empty bed, a ring on her finger, a business card and a key on her pillow. Back in Portland, Oregon, her finds it hard to explain to her ex-military father how being a mixed-race lesbian, she doesn't seem to "be the right fit" for most companies in her field, made abundantly clear in her failed job interview set up by her mentor.

Feeling listless, Grace flees to New York to track down her Vegas wife Yuki Yamamoto, a late night radio talk show host. Even though they develop a deep connection, depression claims Grace and once again, she leaves, this time to a Florida orange grove to reconnect with her mostly absent mother.

“With a cast of diverse and underrepresented characters, Rogers’s debut is a beautiful story of learning to love in so many ways: untraditionally, through deep hurt, through mental illness, and through struggles with which readers can relate. Highly recommended.” (Library Journal)