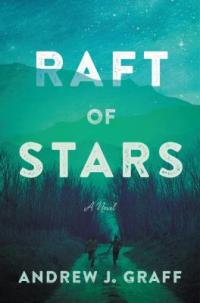 Set in the Wisconsin's Northwoods where the author grew up, Raft of Stars * (also available in eBook and audiobook) by Andrew Graff is the adventures of 10-year-olds Fischer "Fish" Branson and Dale "Bread" Breadwin the summer of 1994.  Fearing that he had killed Bread’s abusive father with his own gun, Fish and Bread fled into the woods around Claypot, WI. With limited supplies and great ingenuity, the pair crafted a raft to carry them down the river. Their destination - the armory where Fish’s father was a decorated soldier.

Cal, the new sheriff in town, and Fish’s grandfather Teddy, with whom he spent his summers took off after them on horseback, trying to intercept them before the deadly rapids, while Fish's mother Miranda, and Tiffany, a purple-haired gas station attendant who found a rare connection with Cal, were making their way in a canoe to reach the boys.

“By the time these six converge at a perilous waterfall, each has come to know more about themselves and each other. Though the resolution yields few surprises, Graff depicts the harsh Northwoods setting and his misfit characters' inner lives with equal skill. The dynamic quest narrative offers plenty of rich moments.” (Publishers Weekly)

“Reminiscent of stories like Stand By Me and Have You Seen Luis Velez?, Graff's debut novel will enchant fans of Chris Cleave and Melissa Bank. Graff's narrative voice is lyrical, with a Southern Gothic edge that fits surprisingly well with the Wisconsin Northwoods setting. Exploring the necessity of the stories we tell ourselves to survive, Raft of Stars is a clever, compelling coming-of-age tale.“ (Booklist) 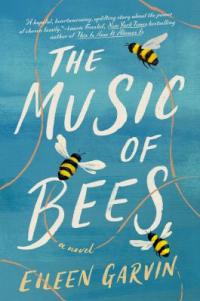 In The Music of Bees * (also available in downloadable eBook and audiobook) by Eileen Garvin, each of the 26 chapters opens with an observation from L. L. Langstroth, American apiarist, considered to be the father of American beekeeping. It tells the story of how three lonely strangers in a rural Oregon town save the local honeybee population.

44 year-old widow Alice Holtzman, a hobbyist beekeeper in Hood River, Ore.  is driving home at twilight with a truck-load of new beehives when distracted, nearly runs over 18 year-old Jake Stevenson in his wheelchair. Left paraplegic from an accident at a graduation party, and with his music scholarship gone, Jake rides his chair all over town to escape his abusive father.  Charmed by Jake’s sincere interest in her bees, Alice invites Jake to stay at her farm.

To extend her hive operation, Alice hires Harry Stokes, a 25 year-old with little option and no family for some carpentry work, and ends up offering him the use of the bunkhouse, and soon the trio find themselves friends as well as family. As Alice toils at her underappreciated job at the county planning department, Jake increasingly takes on the beekeeping responsibilities, and is the first to notice that something is killing the bees. They soon identify the threat - the pesticide conglomerate SupraGro, openly courting the local orchards with free products.

“Both buoyant and bittersweet, Garvin's impressive first novel, a luscious paean to the bonds of friendship and limitations of family, is the kind of comforting yet thought-provoking tale that will appeal to fans of Anne Tyler and Sue Miller.” (Booklist)