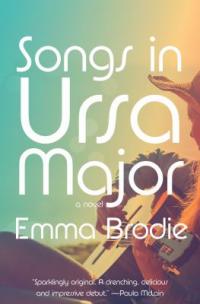 Songs in Ursa Major * by Emma Brodie (also in downloadable eBook and audiobook) opens at the 1969 Bayleen Island Folk Festival. When headliner Jesse Reid was injured in a motorcycle crash, local band The Breakers, instead of being the opening act, took center stage. Led by Jane Quinn, a young singer/songwriter, they delivered the performance of a lifetime.

As Jesse recuperated on the island, nursed by Jane’s aunt Grace, the two met. Sensing Jane’s raw talent and naivete about the music industry,  Jesse mentored her through the production of her first record, and when The Breakers began touring with Jesse’s band, they became involved, a relationship that Jane insisted on keeping secret. “She feared that, if the world knew her as Jesse’s love interest before she’d ever opened her mouth on a national stage, that was all she’d ever be.” Then she made a shocking discovery on tour about Jesse, Jane took off for home.

“(T)his sprawling novel follows Jane and Jesse through the epic highs and lows of their careers. Moving from New York to Los Angeles to Greece to the Grammys, then always back home to the island, Brodie's debut is a furious page-turner, meditating on the glittering beast of fame.” (Booklist)

“Inspired by the folk rock scene of the late '60s and early '70s, and reputedly by the relationship between James Taylor and Joni Mitchell, this superbly crafted debut novel immerses readers in a story of family, love, and music from the first page. Brodie makes a point about the destructive force of drug abuse, and bears witness to unsavory business practices in the music industry. (Library Journal)

For fans of Daisy Jones & The Six.