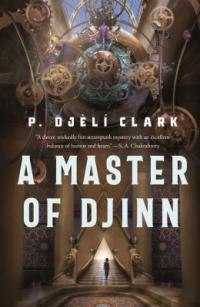 Voted one of the 50 Favorite Sci-Fi And Fantasy Books Of The Past Decade by NPR readers, A Master of Djinn * * * (also in downloadable eBook and audiobook), is Nebula, Locus, and Alex Award-winner P. Djeli Clark’s first full-length novel after a number of novellas, also set in an alternate Cairo universe.

1912 Cairo is a bustling metropolis with commerce, intrigue, and steampunk technology. Fatma el-Sha’arawim, the youngest and only female agent of the Egyptian Ministry of Alchemy, Enchantments, and Supernatural Entities is brought in to investigate multiple murders at the home of a wealthy British merchant.

Ever since the mystic and inventor Al-Jahiz pierced the veil between realms decades ago, djinns, magical beings and humans have been living together in relative peace. Now someone claiming to be Al-Jahiz has murdered members of a secret brotherhood dedicated to his legacy at the eve of an international summit of major European powers that is likely to have global ramifications.  Together with her clever new partner, Agent Hadia Abdel Hafez, and her mercurial, half-djinn girlfriend, Siti, Fatma sets out to uncover the truth behind this self-professed prophet, and save the world from destruction.

“The fantastical worldbuilding highlights the thematic issues of colonialism, spirituality, and race relations, while Clark's prose provides a cinematic lens to issues of gender and class viewed through Agent Fatma's investigations and relationships.” (Library Journal)

“Give this to alternate history enthusiasts and mystery readers who enjoy a dose of the magical. Fans of S. A. Chakraborty, Martha Wells, and Zen Cho should be particularly pleased.” (Booklist) 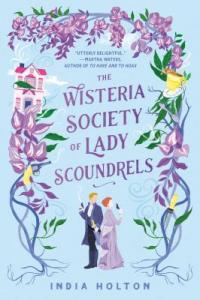 The Wisteria Society of Lady Scoundrels by India Holton (also in downloadable eBook and audiobook), the first in the Dangerous Damsels series, is “a treat for readers who enjoy supernatural historical romances, wordplay, and quirky situations.” (Booklist)

Miss Cecilia Bassingwaite, a junior member of the Wisteria Society, a crime sorority of thieves, pirates and assassins is eagerly anticipating induction into the highest rank (and a place at the high tea table) now that she has robbed a bank, mastered the skills of piloting flying battlehouses, and foiled an assassination attempt on her life.

Before she could claim her seat at the tea table, all the members of the Society were kidnapped by the dreaded Bronte-obsessed, self-proclaimed poet Captain Morvath,  Cecilia has no choice but to team up with her devilishly handsome would-be assassin Ned Lightbourne, who may be a pirate employed by Captain Morvath, or a royal agent assigned to protect her.

“In this joyride of a debut, Holton draws us into a madcap world of courtly corsairs, murderous matrons, and pity-inspiring henchmen. Familiar romance tropes appear but as if in a fun-house mirror, with broad winks at their origins, while characters make sarcastic references to passionate novels in the Victorian canon… As if The Parasol Protectorate series met The Princess Bride and a corseted Lara Croft: Tomb Raider.” (Kirkus Reviews)