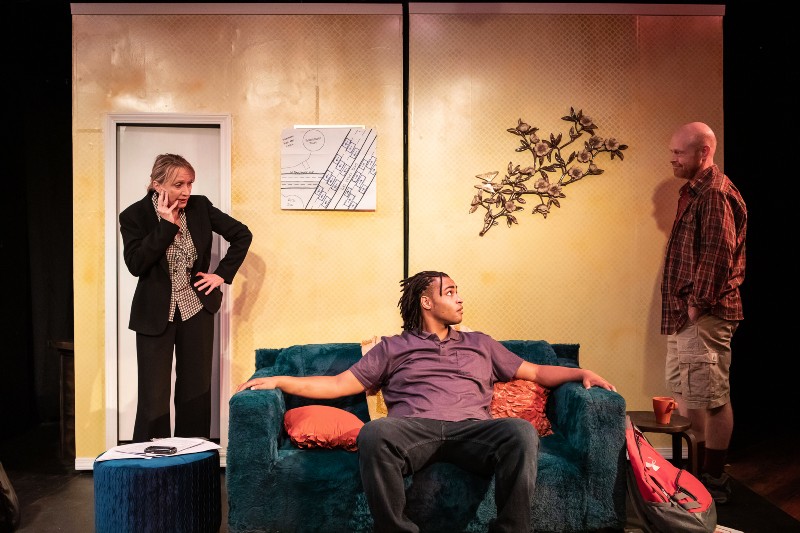 Left to right: Diane Hill as Emily Penrose, Justin Montgomery as Jim Fingal, and Andrew Huff as John D'Agata in The Lifespan of a Fact by Jeremy Kareken & David Murrell and Gordon Murrell, directed by Carla Milarch at Theatre NOVA. Photography by Sean Carter Photography.

During a set change in Theatre Nova’s first live, in-person production in front of an audience since March 2020, a stage crew duo flipped and turned an office desk to reveal a fluffy couch.

As this metamorphosis played out on the Yellow Barn’s stage Saturday night, the audience—masked and seated in spread-out chairs—ooooh-ed and gasped in delighted surprise.

I’m clearly not the only one who’s been pining for little hits of theater magic during this pandemic.

Plus, weirdly, this desk/couch duality embodies an all-too-timely theme at the heart of The Lifespan of a Fact wherein an essayist pushes against the notion (and value) of objective truth.

But this acclaimed writer, John D’Agata (played by Andrew Huff), stakes his claim not for the sake of philosophical debate, but out of artistic self-interest. His latest piece, a lyrical meditation on loss, identity, and Las Vegas (sparked by a young man’s suicide), has already been passed over by The Atlantic because of inaccuracies. It then lands on the desk of fresh-out-of-Harvard fact-checker Jim Fingal (Justin Montgomery), courtesy of the no-nonsense Emily Penrose (Diane Hill), editor of The Believer.

Penrose aims to bolster sales of the next issue of The Believer by replacing a more ho-hum feature on Congressional spouses with D’Agata’s splashy piece, but that means Fingal has only a few days to comb through the essay’s details. After compiling a 130-page list of problematic items (from a 15-page original manuscript), Fingal travels to grill D’Agata in person. Penrose soon follows, leading to a long, brutal weekend of editorial combat. D’Agata argues that his choices, prioritizing aesthetics over accuracy, convey an emotional truth, while Fingal doesn’t understand why D’Agata can’t tell his story while also adhering to journalistic standards.

Written by Jeremy Kareken, David Murrell, and Gordon Farrell, the play was inspired by a real-life clash between D’Agata and Fingal, who together published the 2012 book The Lifespan of a Fact, which contained the two men’s heated, years-long correspondence. I haven’t read these exchanges, but on the basis of the book’s theatrical adaptation, I can’t escape the sense that D’Agata comes off as an arrogant straw man who brings a knife to this ethical gunfight, which significantly defuses the play’s central conflict.

The details—which is to say, verifiable facts—matter in the “real-life” stories we tell, and writers, no matter how lofty their artistic aims, have a moral responsibility to make sense of them as they are. This is, after all, the hard work of essay writing.

D’Agata claims he’s not a journalist, so he needn’t play by that industry’s rules, but this has the ring of a hollow, petulant copout. Readers come to essays with a built-in expectation that the writer has made a good-faith effort to be as accurate and truthful as possible (which D’Agata surely knows). So when a writer refers to the Bucket of Blood bar instead of the Boston Saloon simply because it sounds cooler and changes a girl’s suicidal leap from a building to a hanging—to make the essay’s central figure’s act more distinctive—that inherent trust is broken and any meaning arrived at is undercut.

Thus, for an “issue” play, Lifespan feels like it’s built on a woefully lopsided debate, which may be why it ends with an unsatisfying whimper instead of a bang. The playwrights obviously (and heavy-handedly) aim to send audiences home in a cloud of ambiguity, but instead of being energizing, the drama’s endpoint just feels meh.

Even so, I appreciated learning about this all-too-real recent micro-battle within the writing and publishing world, and it was great to see Huff’s inaugural return to local stages, after many years away. (A 2015 Performance Network production of Stones in His Pockets appears to have been the last time I saw him perform.)

Director Carla Milarch helms Lifespan with a confident hand, finding workable solutions to challenges posed by Theatre Nova’s tight physical space, while set designer Monica Spencer does the same (with varying degrees of success) in order to place us inside the play’s two locales: Penrose’s office and D’Agata’s home. Meanwhile, costume designer Vince Kelley visually underlines the fact that these two men exist in a comfort-first world—Fingal due to youth, and D’Agata due to avocation—while Penrose must necessarily armor herself in more polished, black business attire.

If you go to see Lifespan, which has a run time of 85 minutes, know that Theatre Nova is taking its safety measures seriously. I was asked for proof of vaccination at the door, had to wear a mask inside the theater, and I sat a space apart from the half-capacity crowd.

As intended, these precautions allowed me to focus completely on the story at hand, which, after this brutally long theatrical dry spell, was precisely what I wanted.

Theatre Nova's "The Lifespan of a Fact" runs from September 17 to October 10. Visit theatrenova.org for tickets and more info.