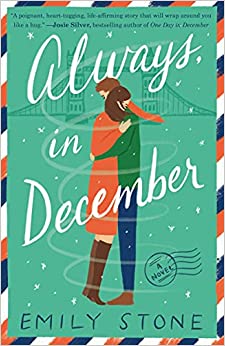 London publicist Josie Morgan has extra reasons to dread December this year. She has just broken up with long-term boyfriend Oliver who has been cheating on her with their office-mate. She is not looking forward to attending the office Christmas party alone. Since losing both of her parents on a snowy December night, for the past two decades she has swapped out letters to Santa with letters to them with the same three words: Missing you, always. But this year, her annual trip to the postbox is knocked off course by a bicycle collision with a handsome stranger who has his own reasons to dread the Christmas season.

When architect Max Carter’s flight to New York is cancelled, the two wind up spending the holiday season together, enjoying a brief, intense affair, until Max disappears without saying goodbye.  Over the course of the next year, Max and Josie will find that fate continues to bring them together in places they’d never expect - a Brooklyn art gallery, a wedding in Scotland, and Josie’s childhood home. As it turns out, Max is harboring a secret that explains his reluctance to have a relationship…“the revelation will change Josie’s life forever. Romance fans should be prepared for a tearjerker ending to this poignant, well-plotted tale of once-in-a-life-time love. It’s as unforgettable as it is heart-wrenching. “ (Publishers Weekly)

Bringing to mind Jojo Moyes' Me Before You, it will also appeal to fans of Josie Silver’s One Day in December;  Jenny Bayliss’s The Twelve Dates of Christmas; and the Christmas novels by Jenny Colgan.  Readers might also want to check out Eight Perfect Hours, (after her debut novel Dear Emmie Blue) by Lia Louis (also in eBook and audiobook) for an enchanting, cozy read on a snowy night.