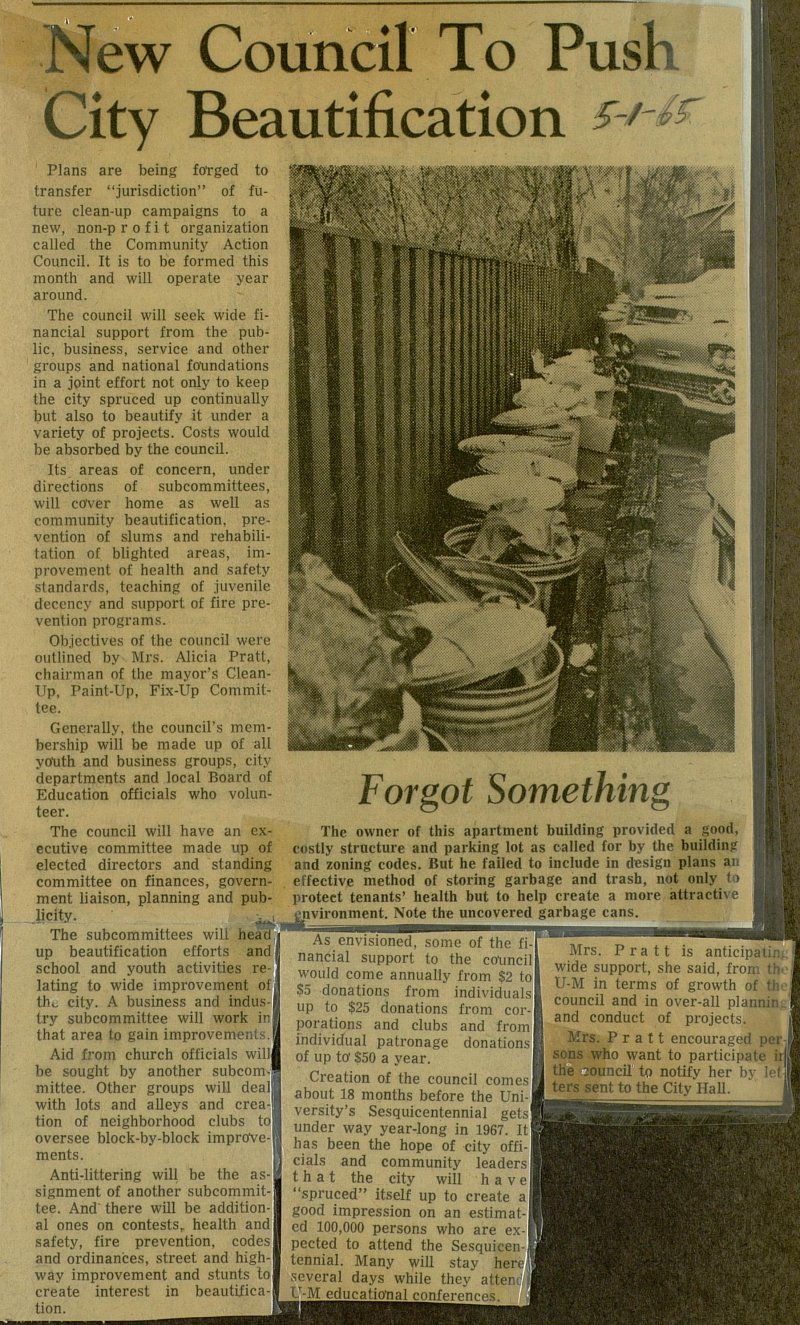 Plans are being forged to transfer "jurisdiction" of future clean-up campaigns to a new, non-profit organization called the Community Action Council. It is to be formed this month and will operate year around. The council will seek wide financial support from the public, business, service and other groups and national foundations in a joint effort not only to keep the city spruced up continually but also to beautify it under a variety of projects. Costs would be absorbed by the council. lts areas of concern, under directions of subcommittees, will cover home as well as community beautification, prevention of slums and rehabilitation of blighted areas, improvement of health and safety standards, teaching of juvenile decency and support of fire prevention programs. Objectives of the council were outlined by Mrs. Alicia Pratt, chairman of the mayor's Clean-Up, Paint-Up, Fix-Up Committee. Generally, the council's membership will be made up of all youth and business groups, city departments and local Board of Education officials who volunteer. The council will have an executive committee made up of elected directors and standing committee on finances, government liaison, planning and publicity. The subcommittees will up beautification efforts and school and youth activities relating to wide improvement of the city. A business and industry subcommittee will work in that area to gain improvements. Aid from church officials will be sought by another subcommittee. Other groups will deal with lots and alleys and creation of neighborhood clubs to oversee block-by-block improvements. Anti-littering will be the assignment of another subcommittee. And there will be additional ones on contests, health and safety, fire prevention, codes and ordinances, street and highway improvement and stunts to create interest in beautification. As envisioned, some of the financial support to the council would come annually from $2 to $5 donations from individuals up to $25 donations from corporations and clubs and from individual patronage donations of up to $50 a year. Creation of the council comes about 18 months before the University's Sesquicentennial gets under way year-long in 1967. It has been the hope of city officials and community leaders that the city will have "spruced" itself up to create a good impression on an estimated 100,000 persons who are expected to attend the Sesquicentennial. Many will stay here for several days while they attend U-M educational conferences. Mrs. Pratt is anticipating wide support, she said, from the U-M in terms of growth of the council and in over-all planning and conduct of projects. Mrs. Pratt encouraged persons who want to participate on the council to notify her by letters sent to the City Hall.