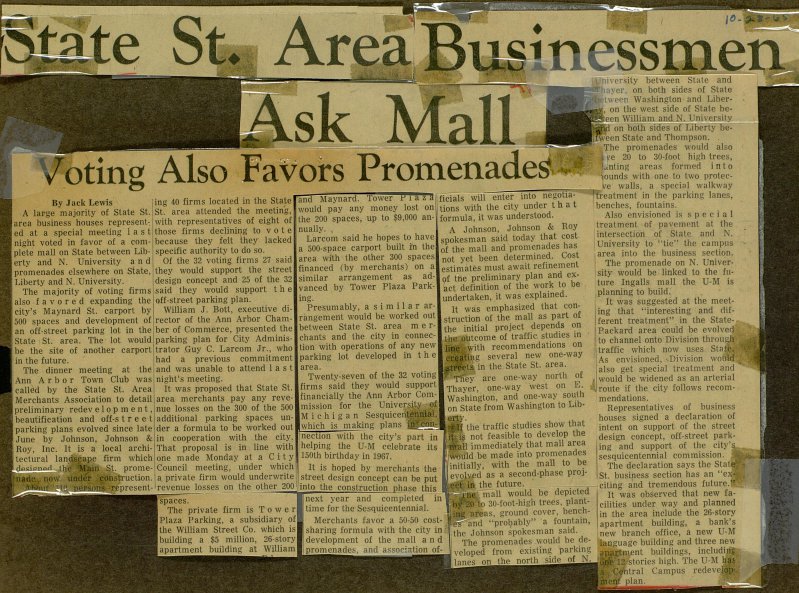 A large majority of State St. area business houses represented at a special meeting last night voted in favor of a complete mall on State between Liberty and N. University and promenades clsewhere on State, Liberty and N. University. The majority of voting firms also favored expanding the city's Maynard St. carport by 500 spaces and development of an off -street parking lot in the State St. area. The lot would be the site of another carport in the future. The dinner meeting at the Ann Arbor Town Club was called by the State St. Area Merchants Association to detail preliminary redevelopment, beautification and off-s t r e e t parking plans evolved since late June by Johnson, Johnson & Roy, Inc. It is a local architectural landscape firm which designed the Main St. promenade now under construction. About 40 persons representing 40 firms located in the State St. area attended the meeting, with representatives of eight of those firms declining to vote because they felt they lacked specific authority to do so. Of the 32 voting firms 27 said they would support the street design concept and 25 of the 32 said they would support the off-street parking plan. William J. Bott, executive director of the Ann Arbor Chamber of Commerce, presented the parking plan for City Administrator Guy C. Larcom Jr., who had a previous commitment and was unable to attend last night's meeting. It was proposed that State St. area mcrchants pay any revenue losses on the 300 of the 500 additional parking spaces under a formula to be worked out in cooperation with the city. That proposal is in line with one made Monday at a City Council meeting, under which a private firm would underwrite revenue losses on the other 200 spaces. The private firm is Tower Plaza Parking, a subsidiary of the William Street Co. which is building a $5 million, 26-story apartment building at William and Maynard. Tower Plaza would pay any money lost on the 200 spaces, up to $9,000 annually. Larcom said he hopes to have a 500-space carport built in the area with the other 300 spaces financed (by merchants) on a similar arrangement as advanced by Tower Plaza Parking. Presumably, a similar arrangement would be worked out between State St. area merchants and the city in connection with operations of any new parking lot developed in the area. Twenty-seven of the 32 voting firms said they would support financially the Ann Arbor Commission for the University of Michigan Sesquicentennial which is making plans in connection wilh the city's part in helping the U-M celebrate its 150th birthday in 1967. It is hoped by merchants the street design concept can be put into the construction phase this next year and completed in time for the Sesquicentennial. Merchants favor a 50-50 cost-sharing formula with the city in development of the mall and promenades, and association officials will enter into negotiaons with the city under that formula, it was understood. A Johnson, Johnson & Roy spokesman said today that cost of the mall and promenades has not yet been determined. Cost estimates must await refinement of the preliminary plan and exact definition of the work to be undertaken, it was explained. It was emphasized that construction of the mall as part of the initial project depends on the outcome of traffic studies in line with recommendations on creating scveral new onc-way streets in the State St. area. They are one-way north of Thayer, one-way west on E. Washington, and one-way south on State from Washington to Liberty. If the traffic studies show that it is not feasible to develop the mall immediately that mall area would be made into promenades initially, with the mall to be evolved as a second-phase project in the future. The mall would be depicted by 20 to 30-foot-high trees, planting areas, ground cover, benches and "probably" a fountain, the Johnson spokesman said. The promenades would be developed from existing parking lanes on the north side of N. University between State and Thayer, on both sides of State between Washington and Liberty, on the west side of State between William and N. University and on both sides of Liberty between State and Thompson. The promenades would also have 20 to 30-foot high trees, planting areas formed into grounds with one to two protective walls, a special walkway treatment in the parking lanes, bcnches, fountains. Also envisioned is special treatment of pavement at the intersection of State and N. University to "tie" the campus area into the business section. The promenade on N. University would be linked to the future Ingalls mall the U-M is planning to build. It was suggested at the meeting that "interesting and different treatment" in the State-Packard area could be evolved' to channel onto Division through traffic which now uses State. As envisioned, Division would also get special treatment and would be widened as an arterial route if the city follows recommendations. Representatives of business houses signed a declaration of intent on support of the street design concept, off-street parking and support of the city's sesquicentennial commission. The declaration says the State St. business section has an "exciting and tremendous future."' It was observed that new facilities under way and planned in the area include the 26-story apartment building, a bank's new branch office, a new U-M language building and three new apartment buildings, including one 12 stories high. The U-M has a Central Campus redevelopment plan.