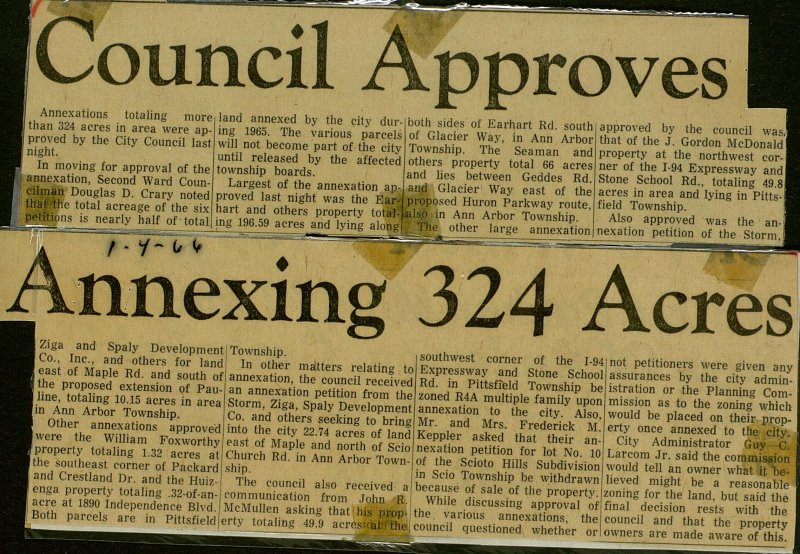 Annexations totaling more than 324 acres in área were approved by the City Council last night. In moving for approval of the annexation, Second Ward Councilman Douglas D. Crary noted that the total acreage of the six petitions is nearly half of total land annexed by the city during 1965. The various parcels will not become part of the city until released by the affected township boards. Largest of the annexation approved last night was the Earhart and others property totaling 196.59 acres and lying along both sides of Earhart Rd. south of Glacier Way, in Ann Arbor Township. The Seaman and others property total 66 acres and lies between Geddes Rd. and Glacier Way east of the proposed Huron Parkway route, also in Ann Arbor Township. The other large annexation approved by the council was that of the J. Gordon McDonald property at the northwest corner of the 1-94 Expressway and Stone School Rd., totaling 49.8 acres in area and lying in Pittsfield Township. Also approved was the annexation petition of the Storm, Ziga and Spaly Development Co., Inc., and others for land east of Maple Rd. and south of the proposed extension of Pauline, totaling 10.15 acres in area in Ann Arbor Township. Other annexations approved were the William Foxworthy property totaling 1.32 acres at the southeast corner of Paekard and Crestland Dr. and the Huizenega property totaling .32-of-an-acre at 1890 Independence Blvd. Both parcels are in Pittsfield Township. In other matters relating to annexation, the council received an annexation petition from the Storm, Ziga, SpaJy Development Co. and others seeking to bring into the city 22.74 acres of land east of Maple and north of Scio Cnurch Rd. in Ann Arbor Township. The council also received a communication from John R McMuIlen asking that his property totaling 49.9 acres at the southvvest corner of the 1-94 Expressway and Stone School Rd. in Pittsfield Township be zoned R4A multiple family upon annexation to the city. Also Mr. and Mrs. Frederick M. Keppler asked that their annexation petition for lot No. 10 of the Scioto Hills Subdivision in Scio Township be withdrawn because of sale of the property. While discussing approval of the various annexations, the council questioned whether or not petitioners were given any assurances by the city administration or the Planning Commission as to the zoning which would be placed on their property once annexed to the city. City Administrator Guy C. Larcom Jr. said the commission would tell an owner what it believed might be a reasonable zoning for the land, but said the final decision rests with the council and that the property owners are made aware of this