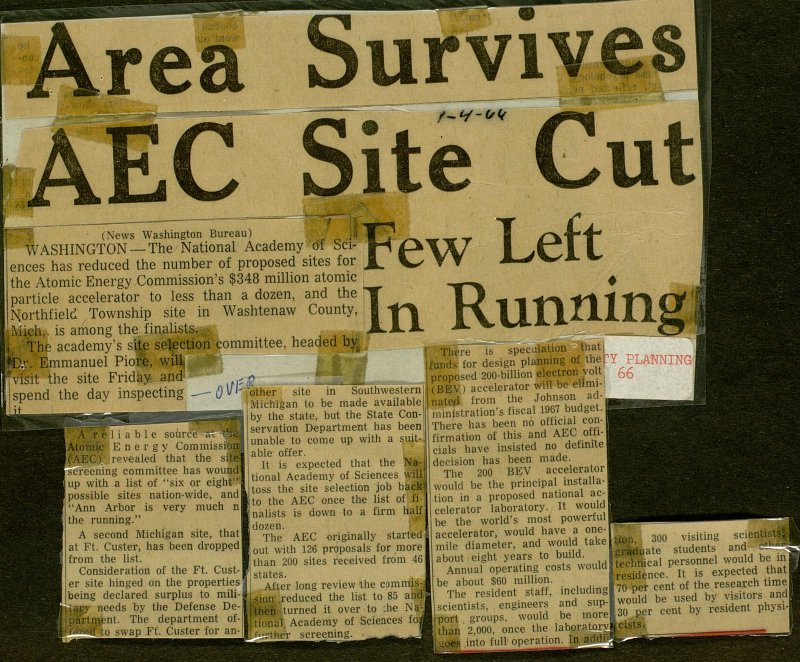 WASHINGTON - The National Academy of Sciences has reduced the number of proposed sites for the Atomic Energy Commission's $348 million atomic particle accelerator to less than a dozen, and the Northfield Township site in Washtenaw County, Mich,. is among the finalists. The academy's site selection committee, headed by Dr. Emmanuel Piore, will visit the site Friday and spend the day inspecting it. A reliable source at the Energy Commissiom (AEC) revealed that the site screening committee has wound up with a list of "six or eight" possible sites nation-wide, and "Ann Arbor is very much in the running." A second Michigan site, that at Ft. Custer, has been dropped from the list. Consideration of the Ft. Custer site hinged on the properties being declared surplus to military needs by the Defense Department. The department offered to swap Ft. Custer for another site in Southwestern Michigan to be made available by the state, but the State Conservation Department has been unable to come up with a suitable offer. It is expected that the National Academy of Sciences will toss the site selection job back to the AEC once the list of finalists is down to a firm half dozen. The AEC originally started out with 126 proposals for more than 200 sites received from 46 states. After long review the commission reduced the list to 85 and then turned it over to the National Academy of Sciences for further screening. There is speculation that funds for design planning of the, proposed 200-billion electron volt (BEV) accelerator will be eliminated from the Johnson administration's fiscal 1967 budget. There has been no official confirmation of this and AEC officials have insisted no definite decision has been made. The 200 BEV accelerator would be the principal installation in a proposed national accelerator laboratory. It would be the world's most powerful accelerator, would have a one-mile diameter, and would take about eight years to build. Annual operating costs would be about $60 million. The resident staff, including scientists, engineers and support groups, would be more than 2,000, once the laboratory goes into full operation. In addition, 300 visiting scientists graduate students and other technical personnel would be in residence. It is expected that 70 per cent of the research time would be used by visitors and 30 per cent by resident physicists.