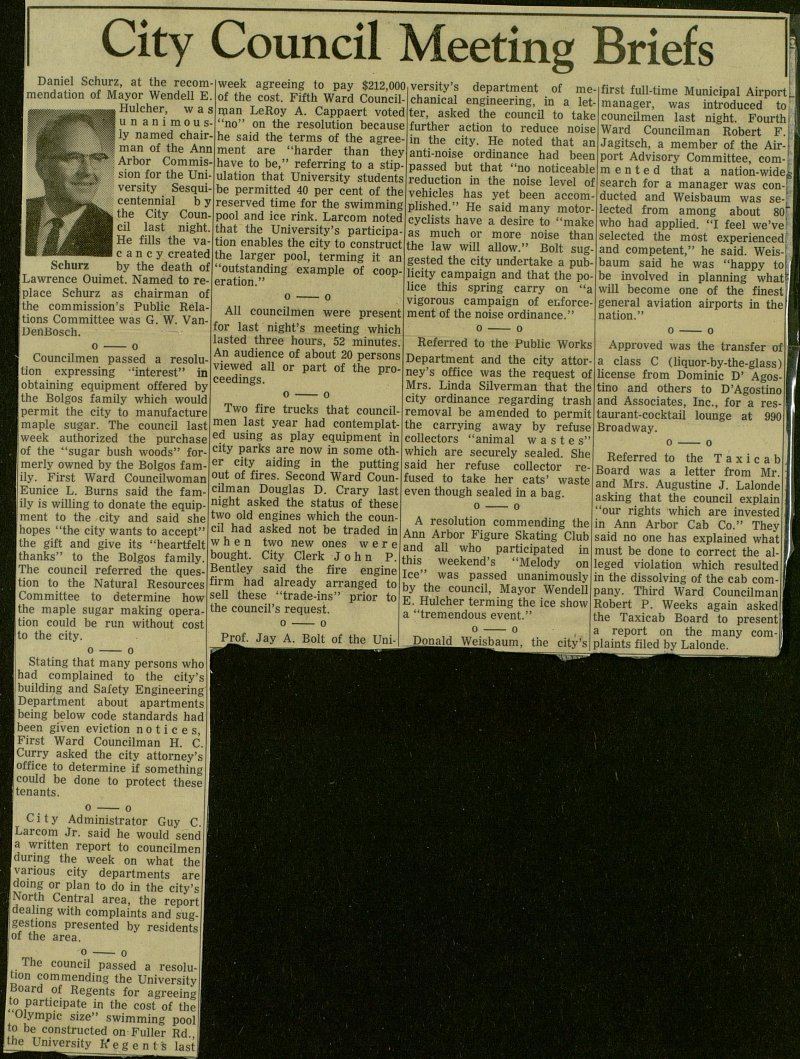 Daniel Schurz, at the recommendation of Mayor Wendell E. Hulcher, was unanimously named chairman of the Ann Arbor Commission for the University Sesquicentennial by the City Council last night. He filis the vacaney created by the death of Lawrence Ouimet. Named to replace Schurz as chairman of the commission's Public Relations Committee was G. W. VanDenBosch. Councilmen passed a resolution expressing 'interest" in lobtaining equipment offered by the Bolgos family which would Ipermit the city to manufacture Jmaple sugar. The council las Iweek authorized the purchase lof the "sugar bush woods" formerly owned by the Bolgos fam[ily. First Ward Councilwoman Eunice L. Burns said the family is willing to dónate the equipment to the city and said she hopes "the city wants to accept" the gift and give its "heartfelt thanks" to the Bolgos family. The council referred the question to the Natural Resources Committee to determine how the maple sugar making operation eould be run without cost to the city. o o Stating that many persons who had complained to the city's building and Safety Engineering Department about apartments being below code standards had been given eviction n o t i c e s, First Ward Councilman H. C. Curry asked the city attorney's office to determine if something could be done to protect these tenants. O o I City Administrator Guy C. ■ Larcom Jr. said he would send la written report to councilmen Idunng the week on what the Ivanous city departments are Idoing or plan to do in the city's North Central area, the report dealing with complaints and II gestions presented by residents I of the area. o o The council passed a 1 tion commending the University I Board of Regents for agreeing I to particípate in the cost of the I ülympic size" swimming pool I to be constructed on Fuller Rd I the University R'egents last! week agreeing to pay $212,00 of the cost. Fifth Ward Counci man LeRoy A. Cappaert votec "no" on the resolution becaus he said the terms of the agree ment are "harder than the have to be," referring to a stip ulation that University student be permitted 40 per cent of th reserved time for the swimming pool and ice rink. Larcom noted :hat the University's participaron enables the city to construct ;he larger pool, terming it an 'outstanding example of cooperation." o o All councilmen were present for last night's meeting which lasted three hours, 52 minutes An audience of about 20 persons viewed all or part of the proceedings. o o Two fire trucks that councilmen last year had contemplated using as play equipment in ity parks are now in some othr city aiding in the putting ut of fires. Second Ward Counilman Douglas D. Crary last ight asked the status of these wo old engines which the counil had asked not be traded in v h e n two new ones were )ought. City Clerk John P. entley said the fire engine irm had already arranged to ell these "trade-ins" prior to ie council's request. o o Prof. Jay A. Bolt of the versity's department of me chanical engineering, in a le ter, asked the council to tak further action to reduce nois in the city. He noted that a anti-noise ordinance had bee passed but that "no noticeabl reduction in the noise level o vehicles has yet been accom plished." He said many motor cyclists have a desire to "make as much or more noise than the law will allow." Bolt sug gested the city undertake a pub licity campaign and that the po lice this spring carry on "a vigorous campaign of enforcement of the noise ordinance." o o Referred to the Public Works Department and the city attorïey's office was the request of Mrs. Linda Silverman that the city ordinance regarding trash emoval be amended to permit he carrying away by refuse collectors "animal wastes" which are securely sealed. She aid her refuse collector reüsed to take her cats' waste even though sealed in a bag. o o A resolution commending the Ann Arbor Figure Skating Club nd all who participated in his weekend's "Melody on ce" was passed unanimously y the council, Mayor Wendell E. Hulcher terming the ice show "tremendous event." o o Donald Weisbaum. the city's first f uil-time Municipal Airport;, manager, was introduced to councilmen last night. Fourth Ward Councilman Robert F.j Jagitsch, a member of the Airport Advisory Committee, com-: m e n t e d that a nation-wide search for a manager was con-1 ducted and Weisbaum was se-[ lected from among about 80F" who had applied. "I feel we've! selected the most experienced: and competent," he said. Weis-i baum said he was "happy to j be involved in planning whatjl will become one of the finest I general aviation airports in the I nation." o o Approved was the transfer of I a class C (liquor-by-the-glass) I Ícense from Dominic D' 1 tino and others to D'Agostino I and Associates, Inc., for a 1 ;aurant-cocktail lounge at 990 1 Broadway. Ij o o Referred to the T a x i c a b J Board was a letter from Mr. 1 and Mrs. Augustine J. Lalonde 1 asking that the council explain II 'our rights which are invested I n Ann Arbor Cab Co." They I aid no one has explained what II must be done to correct the IJ eged violation which resulted [l n the dissolving of the cab I any. Third Ward Councilman 1 Lobert P. Weeks again asked ■ he Taxicab Board to present! report on the many com-B laints filed by Lalonde. m