'Old West Side' Said Slipping But Area Which Can Be Saved 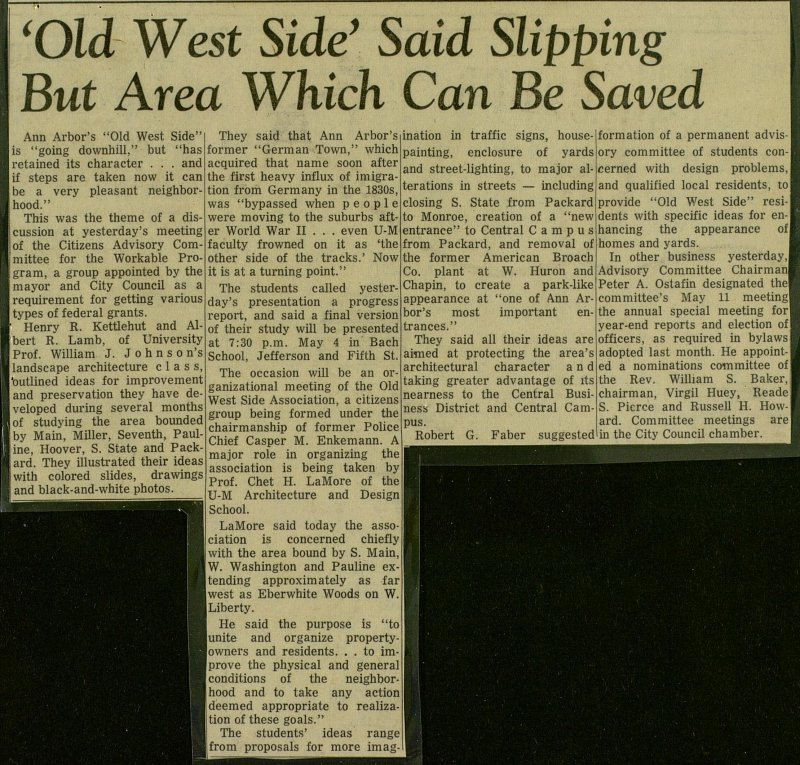 Ann Arbor's "Old West Side" is "going downhill," but "has retained its character . . . and if steps are taken now it can be a very pleasant neighborhood." This was the theme of a discussion at yesterday's meeting of the Citizens Advisory Committee for the Workable Program, a group appointed by the mayor and City Council as a requirement for getting various types of federal grants. Henry R. Kettlehut and Albert R. Lamb, of University Prof. William J. Johnson's landscape architecture c 1 a s s, outlined ideas for improvement and preservation they have developed during several months of studying the area bounded by Main, Miller, Seventh, Pauline, Hoover, S. State and PackI ard. They illustrated their ideas with colored slides, drawings and black-and-white photos. They said that Ann Arbor's former "German Town," which acquired that name soon after the first heavy influx of immigration from Germany in the 1830s, was "bypassed when peoplewere moving to the suburbs after World War II ... even U-M faculty frowned on it as 'the other side of the tracks.' Now it is at a turning point." The students called yesterday's presentation a progress report, and said a final version of their study will be presented at 7:30 p.m. May 4 in Bach School, Jefferson and Fifth St. The occasion will be an organizational meeting of the Old West Side Association, a citizens group being formed under the chairmanship of former Pólice Chief Casper M. Enkemann. A major role in organizing the association is being taken by Prof. Chet H. LaMore of the U-M Architecture and Design School. LaMore said today the association is concerned chiefly with the area bound by S. Main, W. Washington and Pauline extending approximately as f ar iwest as Eberwhite Woods on W. Liberty. He said the purpose is "to unite and organize property owners and residents. . . to im[prove the physical and general conditions of the neighborhood and to take any action deemed appropriate to realization of these goals." The students' ideas range from proposals for more ination in traffic signs, housepainting, enclosure of yards and street-lighting, to major alterations in streets - including closing S. State from Packard to Monroe, creation of a "new entranee" to Central Campus from Packard, and removal of the former American Broach Co. plant at W. Huron and Chapin, to créate a park-like appearance at "one of Ann Arbor's most important entrances." They said all their ideas are aimed at protecting the area's architectural character and taking greater advantage of lts nearness to the Central Business District and Central Campus. Robert G. Faber suggested formation of a permanent advisory committee of students concerned with design problems, and qualified local residents, tol provide "Old West Side" residents with specific ideas for enhancing the appearance ofl homes and yards. In other business yesterday.l Advisory Committee Chairman Peter A. Ostafin designated the! committee's May 11 meeting! the annual special meeting forl year-end reports and election of officers, as required in bylaws adopted last month. He appoint-l ed a nominations committee of the Rev. William S. Baker, chairman, Virgil Huey, Reade S. Pierce and Russell H. Howard. Committee meetings are in the City Council chamber.