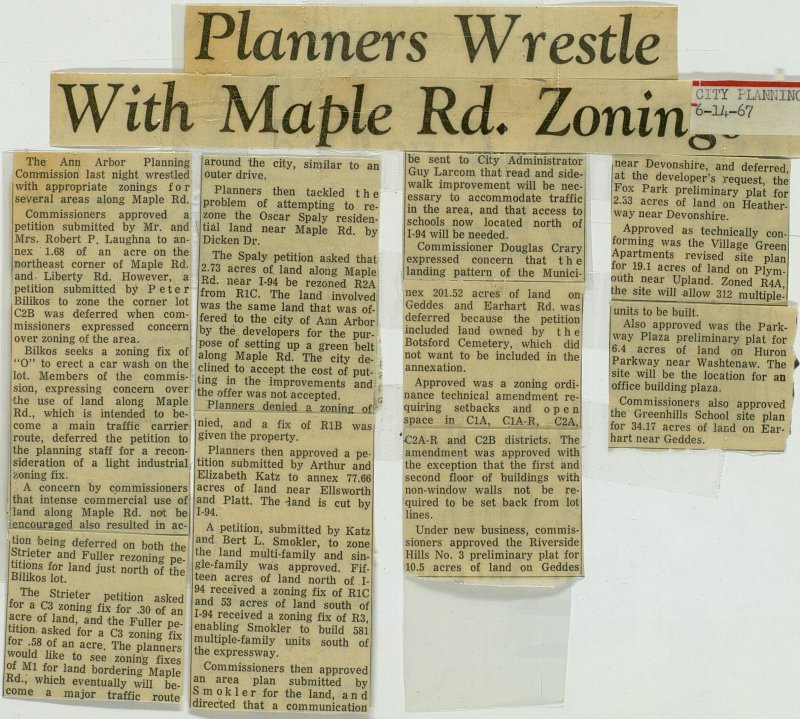 The Ann Arbor Planning Commission last night wrestled with appropriate zonings for several areas along Maple Rd. Commissioners approved a petition submitted by Mr. and Mrs. Robert P. Laughna to annex 1.68 of an acre on the northeast corner of Maple Rd. and Liberty Rd. However, a petition submitted by Peter Bilikos to zone the corner lot C2B was deferred when commissioners expressed concern; over zoning of the area. Bilkos seeks a zoning fix of' "O" to erect a car wash on the lot. Members of the commission, expressing concern over the use of land along Maple Rd., which is intended to become a main traffic carrier route, deferred the petition to the planning staff for a reconsideration of a light industrial zoning fix. A concern by commissioners that intense commercial use of land along Maple Rd. not be encouraged also resulted in action being deferred on both the Strieter and Fuller rezoning north of the Bilikos lot. The Strieter petition asked tor a C3 zoning fix for .30 of an acre of land, and the Fuller petition asked for a C3 zoning fix for .58 of an acre. The planners would like to see zoning fixes of M1 for land bordering Maple Rd., which eventually will beome a major traffic route around the city, similar to an outer drive. Planners then tackled t h e problem of attempting to rezone the Oscar Spaly residential land near Maple Rd. by Dicken Dr. The Spaly petition asked that 2.73 acres of, land along Maple Rd. near 1-94 be rezoned R2A from R1C. The land involved was the same land that was offered to the city of Ann Arbor by the developers for the purpose of setting up a green belt along Maple Rd. The city declined to accept the cost of putting in the improvements and the offer was not accepted. Planners denied a zoning of ..., and a fix of R1B was given the property. Planners then approved a petition submitted by Arthur and Elizabeth Katz to annex 77.66 acres of land near Ellsworth and Platt. The land is cut by 1-94. A petition, submitted by Katz and Bert L. Smokler, to zone the land multi-family and single-family was approved. Fif:een acres of land north of I-94 received a zoning fix of R1C and 53 acres of land south of I-94 received a zoning fix of R3 enabling Smokler to build 581 multiple-family units south of the expressway. Commissioners then approved an area plan submitted by Smokler for the land, and directed that a communication be sent to City Administrator Guy Larcom that road and sidewalk improvement will be necessary to accommodate traffic in the area, and that access to schools now located north of 1-94 will be needed. Commissioner Douglas Crary expressed concern that the landing pattern of the Munici... 201.52 acres of land on Geddes and Earhart Rd. was deferred because the petition included land owned by the Botsford Cemetery, which did not want to be included in the annexation. Approved was a zoning ordinance technical amendment requiring setbacks and open space in CIA, ClA-R, C2A, -C2A-R and C2B districts. The amendment was approved with the exception that the first and second floor of buildings with; non-window walls not be required to be set back from lot lines. Under new business, commissioners approved the Riverside Hills No. 3 preliminary plat for 10.5 acres of land on Geddes near Devonshire, and deferred, at the developer's request, the Fox Park preliminary plat for 2.33 acres of land on Heatherway near Devonshire. Approved as technically conformmg was the Village Green Apartments revised site plan for 19.1 acres of land on Plym3uth near Upland. Zoned R4A -he SJte vvill allow 312 multipleunits to be built. Also approved was the Parkway Plaza preliminary plat for 6.4 acres of land on Huron Parkway near Washtenaw. The site will be the location for an office building plaza. Commissioners also approved :he Greenhills School site plan :or 34.17 acres of land on lart near Geddes.