Commission Tackles Bad Planning Of Past 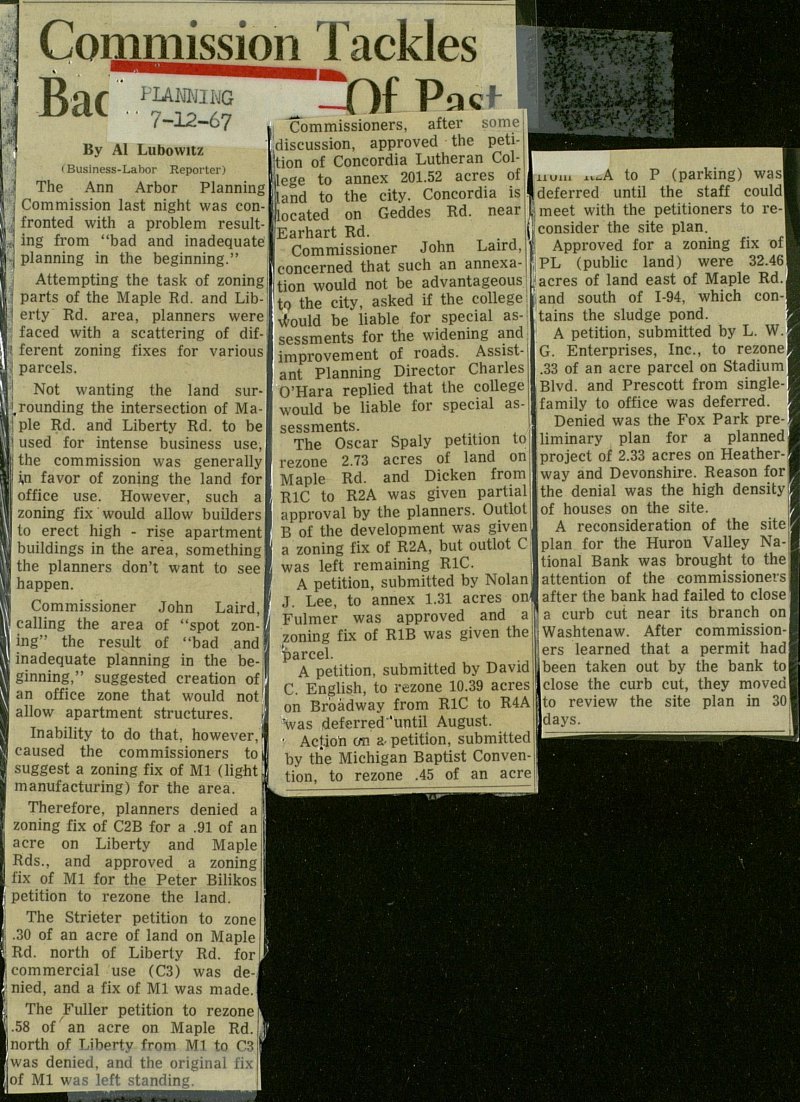 The Ann Arbor Planning Commission last night was confronted with a problem resulting from "bad and inadequate planning in the beginning." Attempting the task of zoning parts of the Maple Rd. and Liberty Rd. area, planners were faced with a scattering of different zoning fixes for various parcels. Not wanting the land surrounding the intersection of Maple Rd. and Liberty Rd. to be used for intense business use, the commission was generally in favor of zoning the land for office use. However, such a zoning fix would allow builders to erect high-rise apartment buildings in the area, something the planners don't want to see happen. Commissioner John Laird, calling the area of "spot zoning" the result of "bad and inadequate planning in the beginning," suggested creation of an office zone that would not allow apartment structures. Inability to do that, however, caused the commissioners to suggest a zoning fix of M1 (light, manufacturing) for the area. Therefore, planners denied a zoning fix of C2B for a .91 of an acre on Liberty and Maple Rds., and approved a zoning fix of Ml for the Peter Bilikos petition to rezone the land. The Strieter petition to zone .30 of an acre of land on Maple Rd. north of Liberty Rd. for commercial use (C3) was denied, and a fix of Ml was made. The Fuller petition to rezone .58 of an acre on Maple Rd. north of Liberty from Ml to C3 was denied, and the original fix of Ml was left standing. Commissioners, after some discussion, approved the petition of Concordia Lutheran College to annex 201.52 acres of land to the city. Concordia is located on Geddes Rd. near Earhart Rd. Commissioner John Laird, concerned that such an annexation would not be advantageous 'to the city," asked if the college would be liable for special assessments for the widening and improvement of roads. Assistant Planning Director Charles O'Hara replied that the college would be liable for special assessments. The Oscar Spaly petition to rezone 2.73 acres of land on Maple Rd. and Dicken from R1C to R2A was given partial approval by the planners. Outlot B of the development was given a zoning fix of R2A, but outlot C was left remaining RlC. A petition, submitted by Nolan J. Lee, to annex 1.31 acres on Fulmer was approved and a zoning fix of RIB was given the parcel. A petition, submitted by David C. English, to rezone 10.39 acres on Broadway from RlC to R4A was deferred until August. Action on petition, submitted by the Michigan Baptist Convention, to rezone .45 of an acre from A to P (parking) was deferred until the staff could meet with the petitioners to reconsider the site plan. Approved for a zoning fix of PL (public land) were 32.461 acres of land east of Maple Rd. and south of 1-94, which contains the sludge pond. A petition, submitted by L. W. G. Enterprises, Inc., to rezone .33 of an acre parcel on Stadium Blvd. and Prescott from single-family to office was deferred. Denied was the Fox Park preliminary plan for a planned project of 2.33 acres on Heatherway and Devonshire. Reason for the denial was the high density: of houses on the site. A reconsideration of the site plan for the Huron Valley National Bank was brought to the attention of the commissionersj after the bank had failed to close a curb cut near its branch on Washtenaw. After commissioners learned that a permit had been taken out by the bank to close the curb cut, they moved to review the site plan in 30 days.